The NHL once had to cancel the Stanley Cup Final due to a worldwide Spanish flu pandemic.

The NHL is currently going through a stunning mumps outbreak that, so far, has impacted five teams with nearly 20 confirmed cases and the potential for even more in the coming days.

Given how rare mumps cases have been in North America recently it is one of the more bizarre situations the league has experienced in some time because, really, who gets mumps in 2014?

No one knows for sure who the league's patient zero is or where it all started, but some, including Ducks defenseman Francois Beauchemin, one of the players in the league to have been diagnosed with the mumps, have speculated that the St. Louis Blues were one of the first teams to deal with them even though they never actually confirmed any cases at the time, calling it instead "a bacterial infection." As far as confirmed cases go, the Anaheim Ducks, Minnesota Wild, New York Rangers, New Jersey Devils and Pittsburgh Penguins have all had players diagnosed, including some of the top players in the league like Penguins captain Sidney Crosby and Wild defenseman Ryan Suter.

Given how close players are to one another on the ice, benches and in the locker rooms, it is the type of thing that is easy to spread within a team, not only among the players themselves, but potentially to coaches, staff and potentially even media. At this point, though, it still seems to be limited only to players and two on-ice officials.

It is not the type of thing that is going to result in the cancellation of games or the halting of the season, but it is still a very different concern than anything most teams have had to deal with.

But whatever concern there might be, it is still not anywhere near the most severe health scare in the NHL's lengthy history.

For that, you probably have to go all the way back to the 1919 Stanley Cup Final when the league had to cancel it after five games due to a worldwide Spanish flu epidemic that made its way to the league. It remains one of just two years in NHL history that the Stanley Cup was not awarded (the second was the 2004-05 NHL lockout), and the only time it was not awarded after the playoffs had already started.

In the late 1910s, the NHL was still very much in its infancy and rising out of the ashes that was its predecessor, the National Hockey Association. At that point, the champions of the NHL and the rival Pacific Coast Hockey Association competed for the Stanley Cup. Because both teams used different sets of rules they alternated each league's rules every other game throughout the series.

(For example, moving the puck with a forward pass was still illegal in the NHL at this point while its limited use was legal in the PCHA; PCHA goalies were also allowed to leave their feet to make saves; the league was also responsible for creating the goal crease and introducing the blue line.)

The 1919 Stanley Cup was to be decided in a series between the NHL champion Montreal Canadiens and the PCHA's Seattle Metropolitans (you can read more about them here), with all games scheduled to be played in Seattle. They would only make it through five games, with each team winning two while the other (Game 4) ended in a 0-0 tie, a game that would forever change the way playoff games were decided.

Following the tie, there were discussions as to which set of rules they should use for the fifth game of the series, with Montreal wanting to play under NHL rules as a replay of Game 4 after no winner was determined, while Seattle wanted to use PCHA rules (Seattle won the two games played under PCHA rules by a combined score of 14-2; under NHL rules they were outscored 8-5). The game was ultimately played under NHL rules with the agreement that future tie games would continue to be played until a winner was determined in overtime, which is exactly what happened in Montreal's Game 5 win thanks to a Jack McDonald goal in the extra period.

But it was after the fifth game when things took a dramatic, and fatal, turn in the series.

The Stanley Cup Final that year was being played in the middle of the great Spanish Flu pandemic of 1918 that claimed the lives of between 5 million to 10 million people across the world, which at the time represented between 3 and 5 percent of the world's population.

The sixth game of the series, which was also going to decide the winner of the series, was to be played on April 1 but both teams saw several players become ill with the flu. The Canadiens were hit the hardest with Newsy Lalonde, Joe Hall, Bill Coutu and Louis Berlinguette all in the hospital with fevers as high as 105 degrees. The game, and the Final in its entirety, were cancelled only hours before the deciding game was to begin.

Hall, one of only 45 players in NHL history to be born in the United Kingdom and a notorious player due to his temper on the ice and frequent suspensions in other leagues, died only five days after Game 6 was supposed to be played due to complications from pneumonia that resulted from the flu.

Following the cancellation of the series, Kennedy had attempted to award the Stanley Cup to the Metropolitans but Seattle refused to accept it due to the conditions.

Today, the Stanley Cup has both teams listed on it for that year. 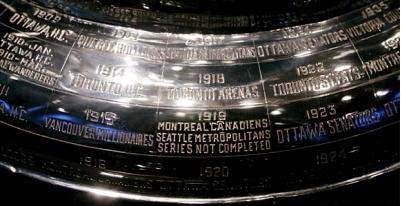 How the Avs went from last place to Stanley Cup champs

How Avs took down Lightning | Latest on Deshaun Watson