Ja'Marr Chase put together one of the single greatest seasons in college football in 2019 before opting out of the 2020 season and he did it at LSU with Joe Burrow as his quarterback. Now, heading into 2021 training camp, he is a member of the Cincinnati Bengals and Burrow -- who plans to practice on Day 1 of camp after recovering from a torn ACL -- is his quarterback once again. Fireworks? Maybe -- but you'll have to pay up for Chase as his ADP has been on a steady rise since May.

We want to keep you up to date with everything surrounding his 2021 profile. Below, we'll break down Chase's outlook, changes in his ADP, where he's going in mock drafts, training camp/preseason updates and more.

Ja'Marr Chase was the best receiver in the 2021 class and it's hard to imagine a better landing spot. Chase played with Joe Burrow in college and he should instantly be the team's No. 1 receiver and a low-end No. 2 Fantasy option. That's worth a pick in the first five rounds of a redraft league. In Dynasty, Chase is an instant top-12 receiver and should be the No. 1 overall pick in a rookie-only draft. This may all seem a bit aggressive for a 21-year-old receiver who sat out 2020, but remember Justin Jefferson?

While you shouldn't expect Chase to match Jefferson's rookie year, you should remember that in 2019 Chase had 240 more yards and two more touchdowns playing alongside Jefferson and Burrow at LSU. - outlook provided by Heath Cummings

Sportsline's Jacob Gibbs also provided a full breakdown of Chase's outlook for Fantasy in 2021 but also for Dynasty leagues beyond that.

Earlier this offseason, I also watched Chase on All-22 film and broke down his entire scouting report -- strengths and weaknesses. You can find that here. 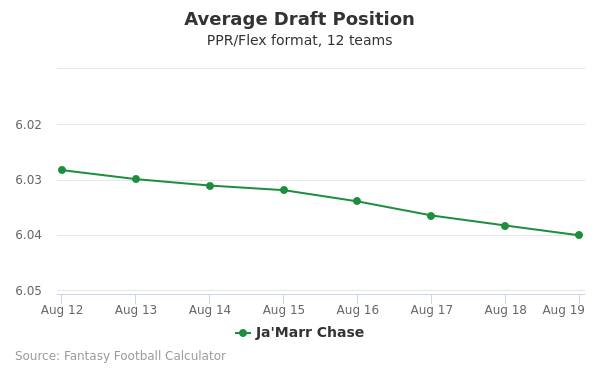 Chase's ADP saw a steady climb prior to training camp, but with reports of the rookie's issues with drops and an overall slow start to camp, the ADP is starting to fall a bit.

Cowboys preview: Is Zeke still worth it?