Rounding up Monday night, setting up for Tuesday night and hitting several links along the way. It's The Lineup. 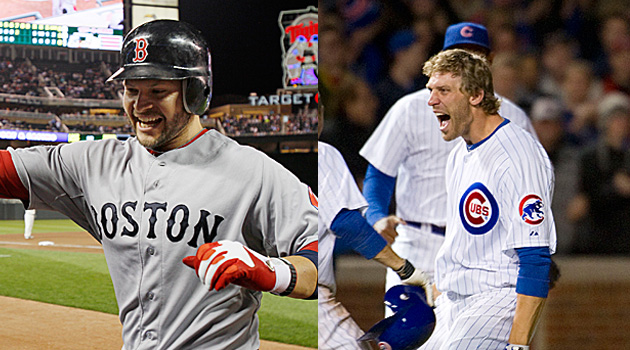 The Giants are hot, the Royals are not, the Dodgers bounced back and Jake Peavy may be returning to '07 form. We've got another night of baseball in the books, so let's dive in.

Full Monday scoreboard, including recaps and box scores for all 10 games

Joe Mather, Cubs. The former Cardinal exacted some revenge on his old team, as Mather came up big in the clutch for his new squad. With the bases loaded and two outs in the bottom of the ninth, the Cubs were facing a 4-13 start to the season. But Mather lined a single to center off Cardinals closer Jason Motte to plate the tying and winning runs for the Cubs.

Cody Ross, Red Sox. After an embarrassing week at home, the Red Sox needed a win pretty badly Tuesday night. And they got one by the skin of their teeth. Jon Lester had another bad outing for the Sox and the Twins held a 5-3 lead entering the seventh inning. Ross then tied it with a two-run blast in the seventh and put the Red Sox ahead for good with a solo homer in the ninth. And it's a 6-5 victory for Bobby V. and his troops.

Nate Schierholtz, Giants. The offense as a whole was big for the Giants -- who are quietly playing great baseball right now -- racking up 13 runs on 24 hits in sweeping a double-header over the Mets. But let's give Schierholtz the spotlight here, as he went 6-for-10 with two triples, a home run, two runs and three RBI in the two games combined. Also, it's fun to see the lines waver like this in April: Schierholtz's batting average rose 69 points and his slugging percentage jumped 168 points.

Kyle Kendrick, Phillies. This isn't gonna cut it in replacing Cliff Lee. Kendrick was dismantled by the Diamondbacks, giving up 11 hits and seven earned runs in just three innings. The Phillies lost 9-5.

Joe Paterson, Diamondbacks. I usually don't include players from winning teams here, but this line was too horrible to ignore. Paterson faced five hitters -- with a 9-0 lead, too -- and didn't record an out. The play-by-play? Single, double, single, home run, home run. Ouch. That'll ruin his ERA for the entire first half of the season -- such is the life of a reliever.

Ike Davis, Mets. He left the bases loaded three times in the double-header. So that amounted to nine runners left on base in five at-bats -- which included three strikeouts. He's now hitting just .136 and you have to wonder if he actually has Valley Fever and, if so, how it's affecting him. The Mets haven't said a word about it since saying he "likely" has it, so not many people actually know what's going on.

Jose, Jose Jose Jose. After nine years, four All-Star games, 735 runs, 99 triples, 374 stolen bases, a batting title and much fan adoration in New York, Jose Reyes took his talents to south beach this past offseason, signing with the Marlins. He returns to Citi Field as a foe for the first time Tuesday evening. It'll be interesting to see the mix of cheers/boos, that's for sure. Josh Johnson (0-2, 5.94) pitches for Reyes' Marlins while Johan Santana (0-2, 3.97) takes the ball for the Mets. 7:10 p.m. ET

Can Latos match Cain? The Reds didn't ship two of their top prospects to San Diego for this version of Mat Latos (0-2, 8.22). Tuesday, he has the tough task in attempting to get on track against a hot Giants team, which has won five of six (and gone 9-4 since an 0-3 start). To make matters worse for Latos, his counterpart is throwing the ball as well as any pitcher in baseball right now. Matt Cain (1-0, 1.88) has an 18-inning scoreless streak going. 7:10 p.m. ET/4:10 p.m. PT

Full Tuesday schedule, with all 30 teams playing in night games

• Renaming Cleveland's club. The wonderful blog Uni Watch has a contest going where they're accepting submissions for a new team name for the Indians, along with possible uniforms. There are 20 entries in the contest, with the Cleveland Spiders being the most common name. Here is Part I (the first 10) and here is Part II. It's definitely worth a look. Please note there is no real movement to rename the Indians. This was just a fun exercise.

• Cribs: Jeter version. Do you have $17.95 million lying around (who doesn't!?!)? If so, take a look at Derek Jeter's New York City penthouse. It's for sale and it looks awesome. (HUH. magazine)

• Painful foul ball. Don't click through if a picture of a big toe with the nail torn off will gross you out. Anyway, Michael Cuddyer tweeted out "what happens when you foul a ball off of your toe." It doesn't look fun.

• Lots and lots of ink. A dude named Mike McWain has spent $10,000 total to cover his body in baseball-related tattoos. There's a slideshow of all his ink on tri-cityherald.com.

• Dugout for sale. I have no idea who would want such a thing, much less afford it and find a proper spot for it, but the visitor's dugout from the old Seattle Kingdome is available on eBay for $7,499.99. (Big League Stew)

• Don't let the door hit you ... The LA Times notes that the current homestand for the Dodgers will officially be the last under the Frank McCourt regime, as the sale to Guggenheim Baseball Management will be completed by April 30.

• Moneyball morphs. We knew the Billy Beane A's concentrated on on-base percentage and working deep counts. In fact, many may not have known the lengths taken in the organization. The Modesto Bee has an article about the shift in philosphy, which is that now the organization wants hitters to be more aggressive and is finally allowing them to swing on a 3-0 count. In the past, not only was that forbidden, but hitters were required to walk a minimum of 10 times per month. It was a quota.

• Next big thing. He's not eligible to be signed by a big-league club until July 2, but scouts are already drooling about MLB.com's No. 1 international prospect, 16-year-old Dominican Gustavo Cabrera. His power/athleticism combo reportedly has scouts comparing him to Justin Upton.