Is Jake Peavy back?

Jake Peavy has been dominant so far this season, looking like who we thought he'd become back in 2007. 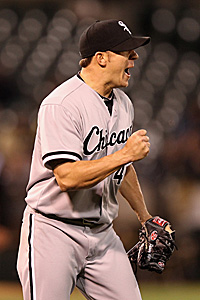 Remember Jake Peavy back in 2007? He won the NL Cy Young by going 19-6 with a 2.54 ERA, 1.06 WHIP and 240 strikeouts. It marked the third time in four seasons Peavy was one of the best pitchers in baseball and, at age 26, he seemed destined to be an elite ace for years to come.

Fast-forward to 2012 and we're getting a glimpse of what we always thought he would be. After a dominant performance Monday night -- where he shut the A's out and allowed only three hits and two walks -- Peavy is now 3-0 with a 1.88 ERA and 26 strikeouts against only four walks in 28 2/3 innings pitched.

And if you wish to denigrate Peavy for handcuffing the A's in Oakland's spacious home, you better look at his previous opponents. In the one game he didn't win, he allowed three runs in six innings to the best offense in baseball (Rangers). Next start, he worked 6 2/3 innings, allowing only two hits and two earned runs while striking out eight against the Tigers. He also had a great outing against the home-run-happy Orioles.

In between 2007 and this season, we've seen Peavy deal with elbow and ankle injuries, a detached lat muscle which required surgery and some inconsistency -- likely caused by the injuries. If he is finally, completely healthy, he may well be joining the elite. After all, Peavy's not old (he'll turn 31 on May 31).

Can the Red Sox stay hot as a favorite? | Best bets