Hall of Fame third baseman George Brett talks about the pressure on prospects, his place in Kansas City baseball history and playing the game 'the right way.' 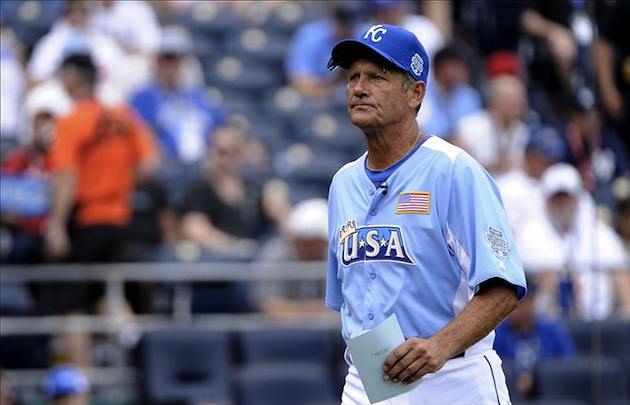 If you tune into any bit of the All-Star weekend, you're going to see George Brett. The Royals' great was named the event's official ambassador, and as manager of the U.S. Futures team, player in the celebrity softball game and various other events around town, it will be impossible to miss him. The Hall of Fame third baseman had a press conference before Sunday's All-Star Futures Game and here are some highlights.

Question: What have you heard about Wil Myers?
Answer: The same thing -- we didn't hear a lot about Billy [Butler] a whole bunch, we knew he was a good hitter, but we didn't know where he would play -- but with with [Mike] Moustakas, you heard a lot about him. [Eric] Hosmer, you heard a lot about him. [Alex] Gordon, he was the player of the year in college, minor-league MVP for all of the minor leagues in one year of minor league baseball. He came here with a lot of fanfare, Hosmer came with a lot of fanfare, Moustakas came with a lot of attention and I think the same thing will happen with Myers. They've been bragging about the minor-league system now for the last three or four years, and deservedly so. … Wil Myers -- Dayton [Moore] used to say this is the first wave, and Wil Myers is start of the second wave and hopefully the third wave to come.

Q: How much is that kind of attention different from when you were playing? Did anyone care that George Brett was coming up?
A: I don't think anyone knew who I was. I didn't hit .300 in the minors. Hit .125 my first year in the big leagues with 45 at-bats, the next year I was hitting .200 at the All-Star Game with 200 at-bats. I didn't come up with a lot of fanfare, but these guys have.

Q: Is it fair to these guys?
A: No, it's not fair, but life's not fair. Especially now with social media and all the things going on out there, the Internet. People are aware of what these guys are doing. Nobody was aware of what George Brett was doing in Billings, Mont., in 1971. Nobody cared what I did in San Jose, playing for the San Jose Bees, in 1972. You don't know. Nowadays you know everything. You can get on the computer and find everybody's stats. So, I think people are more into it and they look forward to seeing Wil Myers in person. I heard from the gal who put this game on for Major League Baseball, that Wil Myers was at the FanFest and was getting lines than Hall of Fame players. They've heard about him. Social media. Internet. Twitter. Tweeted. Twutter, whatever it's called. All that stuff. Facebook.

Q: Does it make it harder for these guys?
A: I'd imagine it does because expectations are so high the day they get here. Not many people get to the major leagues and succeed right away. There are some struggles. Everyone seems to struggle. With the expectations you put on these guys, the Hosmers, Moustakases, Gordons -- and every organization can say that about guys they bring up. I don't know that Joey Votto was an instant success when he came up with Cincinnati. I don't know if he was. I don't follow the Cincinnati Reds, but I'll tell you one thing, everyone in Cincinnati will tell you if he was an instant success.

Q: You've been going 100 mph for the last year promoting this event, how excited are you to …
A: Be over? (Laughter).

Q: Well, yeah. To show that this is your town, your stadium …
A: It's a been a good run. It really has. We've given a lot of money out in Kansas City. A lot of charitable work has been done here, a lot of volunteers ... It's been very time consuming, to say the least. [Monday] it starts at 7 a.m., today it started at 6:05 a.m., I got picked up to go to the fun run downtown. Today I'm done after the softball game. (Pulls out schedule) It started at 7:15 and goes until … wow. That's a long time. It goes until 10 p.m. -- and that's if I want to go home and leave the Gala early. I like to go to the Gala.

Q: Are you ready to give that up? What does it say about the Kansas City Royals..
A: No, I love this town. This town adopted me when I came here in '73. It's a great town. I'm honored -- extremely honored -- that they named me ambassador. I didn't realize the work that would be involved, but it's a lot of fun to show off the city.

Q: Right, but there's an undercurrent when you retired 19 years ago and there's no successor and nobody who has earned the right to be an ambassador because of the product on the field. Are you ready for someone to be able to take up that mantle? A successor?
A: Do I want someone to get more hits than me? No. Do I want someone to hit more home runs than me? No. Do I want someone to have more RBI than me? No. I get a kick out of seeing the all-time leaders and my name's on top of every one, with the exception of strikeouts. I get a kick out of that. I don't want anyone to break my records. I want someone to step up to the plate and play their whole career here. How great would it have been if we would have been able to keep Johnny Damon? What if we could have kept a Carlos Beltran? How great would it have been to keep some of the guys that we had to trade because of the economics of the game of baseball? It would have been nice. Hopefully the economics are changing a little bit and we get to keep a Moustakas, a Hosmer, a Wil Myers -- but time will tell. We're 15 years from knowing how good these guys will be. I think we have the people in line to take over. I'm almost 60 years old, I just turned 59, maybe in another 15 years when I'm 75, there'll be a guy, which would be great.

Q: There are five rookies in Tuesday's game, they've seen you play -- Bryce Harper said he never saw you play, but he grew up and you were one of the guys he grew up trying to emulate -- what did you try to get across to these guys about playing the game?
A: I played like my dad was in the stands. I know in high school, I know in Little League, if I hit a ground ball and didn't run it out, I got my ass kicked. I had three older brothers that played the game the same way I did. My brother Ken played 12 years in the major leagues, my brother Bobby, my brother John, neither made it to the major leagues, they would have given their left arm to be in my shoes. My high school coach would've kicked my ass if I didn't run out a ball to first base. That's the way I was taught. I told the guys in there, my team in the Futures Game, guys, it's time to show off your abilities, but don't show off. No showboating. The first guy that doesn't run hard to first base on a grounder, the first guy who hits a pop-up and doesn't run hard to first, he's out of the game. He's out of the game. We don't play games like that. We're not going to play the game like that. We're going to play to win. We're going to embarrass the other team, hopefully, but we're going to have fun and play the game hard and play the game right. End of story.

Tatis Jr. goes yard in first game back from injury