Twins slugger Miguel Sano lost a monster home run thanks to one of the Tropicana Field catwalks on Thursday. He had to settle for a double.

The Rays and Twins continued their series at Tropicana Field Thursday night (GameTracker). Minnesota took the first two games of the three-game set between the two AL wild-card hopefuls.

The Rays had an early lead Thursday night when Twins slugger Miguel Sano stepped to the plate with a runner at first base against Drew Smyly. Despite being only 22 with 46 MLB games under his belt, Sano is an absolutely terrifying hitter because of his mammoth power. He's hit 12 homers in those 46 games, including some majestic blasts.

Sano crushed a monster two-run home run off Smyly ... except one of the Tropicana Field catwalks got in the way. Look at this play:

Man, he destroyed that pitch. It had the sound and the look of a home run. Gone off the bat. Zero doubt about it. Smyly threw it right into Sano's wheelhouse. Instead, the ball was ruled a ground-rule double. Here is the Statcast data, in case you have any doubt about that being on its way to leaving the yard: 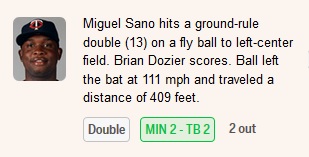 A projected distance of 409 feet and 111 mph off the bat? Yeah, that's a homer. Easily out of the yard. Here are the catwalk ground rules at Tropicana Field:

Sano hit one of the higher catwalks and the ball landed in fair territory. A Rays player could have caught the ball and Sano would have been ruled out. Crazy.

On the bright side, the blast introduced me to the magic of @SanoAlerts:

** Sano Warning canceled. Possible property damage to the catwalk in left center field at the Trop. Loss of Homer. Only given double **

So remember, at the end of the season when you're marveling at Sano's stats, make sure you subtract one double and add one homer. Tropicana Field robbed Sano of a monster dinger.