Just because: The 'Ted Williams shift'

The great Ted Williams was the most famous early victim of extreme defensive shifts.

Defensive shifts -- i.e., moving fielders out of their usual jurisdictions based on the pull tendencies and handedness of the batter -- are of course a prominent thing these days. Yet while that prominence is a recent phenomenon, the shift itself is not.

As Jeff Zimmerman notes within the pages of the 2014 Hardball Times Annual, the shift dates back to at least the 1920s, when opposing managers resorted to the strategy in an attempt to cut down on hits off the bat of Cy Williams. As well, the luminous Babe Ruth faced occasional outfield shifts during his prime seasons. However, it was the "Ted Williams shift" employed by Indians manager/shortstop Lou Boudreau on July 14, 1946 that took things further.

In the opening game of a Fenway doubleheader, Williams, in his first season back from World War II military service (and waist-deep in what would be his first MVP campaign), went 4-for-5 with three homers and eight RBI. For the second tilt, Boudreau, with creativity likely borne of desperation, employed the following defensive alignment when Williams ambled to the plate ... 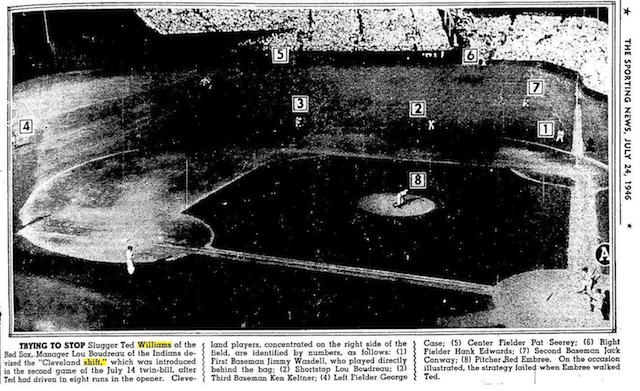 As you can see, that's a heavy, heavy concentration of fielders positioned to the pull side of the left-handed-batting Williams. Shifting to such an extreme had never been seen before.

The immediate result? Williams went 1-for-2 with a double and a pair of walks. So that's ... better, at least compared to what he wrought in the first game of the double-header. Note, though, that Williams posted a .750 OBP for the game, and the shift was still deemed a success of sorts. Such were the hitting chops of the Splendid Splinter.

The Sox won the pennant that year, and in the '46 World Series they were opposed by the Cardinals and manager Eddie Dyer. Dyer had taken note of how Boudreau played Williams during the regular season and borrowed the approach, with some slight modifications. Observe: Only slightly less extreme, as you can see.

Over the years, Williams encountered shifts quite often, and for a long time he, famously and proudly, didn't do much in the way of altering his approach with the bat. None other than Ty Cobb called him "stupid" for not being more adaptable.

Finally, a bit of advice from another great hitter helped Williams attack the shift by going the other way without tinkering too much with is cherished and carefully honed swing. Here's Williams in a 1993 interview with Bob Costas talking about just that:

Paul Waner -- sage counselor to Ted Williams and brandisher of one of the great nicknames in baseball history ("Big Poison"!). In any event, no amount of shifting could truly dampen Williams's numbers, as the remainder of his superlative career would prove.

Still, the occasion of that first "Ted Williams shift" was a notable one, and in 1959 the Fleer company devoted a baseball card to Boudreau's novel-at-the-time stratagem. Witness ... 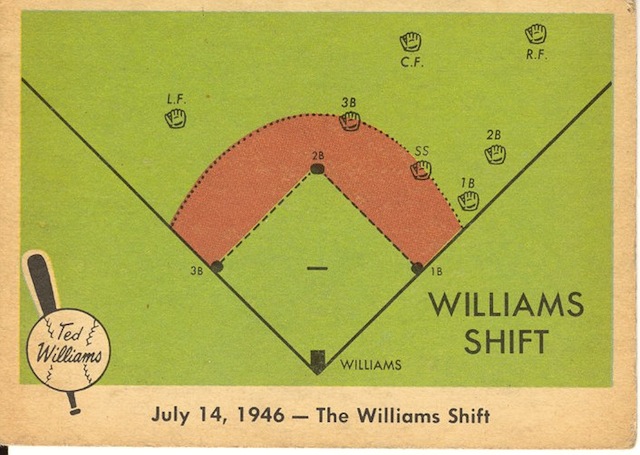 A baseball card devoted to a tactical maneuver? Approval granted.

As for the efficacy of shifts, they didn't work all that will on Williams, but, as Jeff Zimmerman's research suggests, they're generally quite effective these days, probably because of the advanced batted-ball data that are available to teams.

Yet it took a thundering hitter like Williams and a dynamic baseball mind like Boudreau to force the innovation upon the game in such a memorable and daring way.