It's been 55 years since the Colts beat the Giants for the NFL title, but that doesn't mean the impact of that game has declined.

If you asked the late commissioner Pete Rozelle, what game had the most significant impact on the NFL's future, he'd point to the contest that took place 55 years ago on Saturday.

Rozelle would know. He, after all, was the one who ushered the pro football game from the 1950s in which the sport drew lesser ratings than horse racing all the way to 1989 when football had begun to overtake what once had been the National Pastime of baseball.

Known as the Greatest Game Ever Played, the contest between the Baltimore Colts and New York Giants that would decide the 1958 NFL title was the moment that tilted pro football. Or so Rozelle believed.

"Pete Rozelle always told me that the reason pro football took off was because that happened just at that time, in that season, and it happened in New York," late Giants owner Wellington Mara once said.

Already, the teams had met three times earlier in the season. The Colts had taken both preseason exhibition games (yeah, it was a different time), but in the regular season, the Giants had knocked off Baltimore, 24-21.

In the NFL title game played in Yankee Stadium, New York was leading 17-14, but with 10 seconds left to play, the Colts' Steve Myhra kicked a 20-yard field goal to force the game into overtime  (“I told myself I better not miss it,” Myhra later said, “or it would be a long, cold winter back on the farm in North Dakota.").

It was the only time in league history that a league championship game or a Super Bowl has gone into an extra period.

After the Giants won the toss, they went three-and-out before having to punt. Colts quarterback Johnny Unitas took over with the ball on Baltimore's 20-yard line, and as the NFL communications staff remembers it:

[Unitas] put Baltimore into position after completing a 12-yard pass to Berry to set up first-and-goal at New York’s eight-yard line.

A fan raced onto the field. The officials called time out. Unitas went over to talk to [coach Weeb] Ewbank.

“Keep it on the ground,” Ewbank said. “We don’t want an interception here. We can go for the field goal if running plays don’t work.”

Unitas followed instructions… initially. He handed off to [Alan] Ameche for a one-yard gain off right tackle. Then he stunned everybody -- especially Ewbank -- by fading back and floating a six-yard pass along the right sideline to wide receiver Jim Mutscheller.

That set up third-and-goal at the one-yard line. Unitas called "16 power," a play designed to send Ameche through the right side of the line. Mutscheller and [Lenny] Moore leveled Giants linebacker Cliff Livingston and safety Emlen Tunnell. Colts tackle George Preas and guard Aled Sandusky cleared out a hole that the 220-pound Ameche roared through, falling from his momentum after crossing the goal line for the game-winning touchdown.

So, who exactly was Alan Ameche -- who, it should be noted, left the postgame celebration early so he could earn an extra $500 to appear on the "Ed Sullivan Show" -- and what was his fantastic nickname?

As for the long-lasting impact of that game, the AP, via the Ocala Star-Banner, gave its take in 1983. 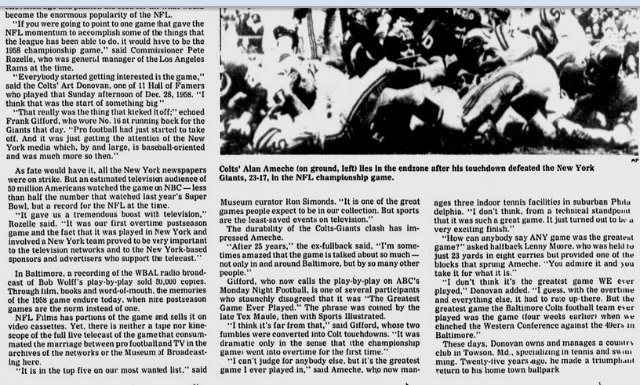 Or, as the AP wrote in the aftermath: “If they play pro football for 100 years, they never can top Baltimore’s first championship snatched dramatically in a sudden-death playoff. It seems pro football has come of age.”

How right they were.