NBA Finals: A rock, hammer and cracking of Spurs' majesty in Game 7

MIAM -- There's a quote that is framed and has hung in the San Antonio Spurs' locker room for 17 years.

I know it has hung there for 17 years, because when I asked Gregg Popovich about it during the Western Conference finals, all he would say is:

(He has spoken to reporters at length about the origin of the decision to adopt that as their mantra; you should read his comments.)

It exists in every language of a member of the Spurs. French. Spanish. Any language a team member speaks, it's there for him. It's a quote from the poet Jacob Riis. 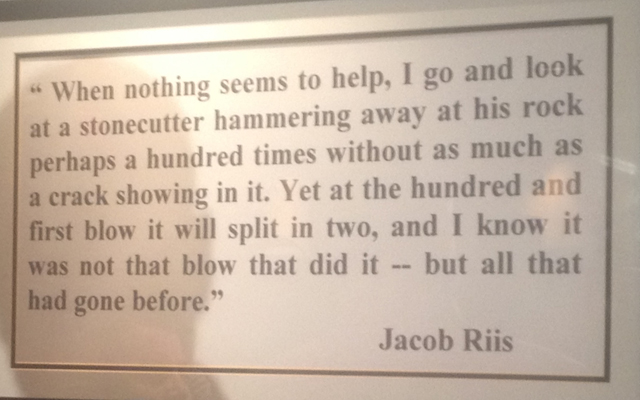 "When nothing seems to help, I go and look at a stonecutter hammering away at his rock perhaps a hundred times without as much as a crack showing in it. Yet at the hundred and first blow it will split in two, and I know it was not that blow that did it -- but all that had gone before."

That quote is the summation of the San Antonio Spurs and their approach to professional basketball. They are always focused on how they do things, not the reward for what they do. They care about the process, not the result.

It is that attitude that has made their organization four-time champions under Popovich, that has allowed them to maintain the success for so long. It has helped them transform D-League players like Danny Green into big-game killers (particularly because of how they use the D-League), and it has made them elite.

The core idea that quote describes is present at every level, from roster management to practice habits to in-game execution to D-League development to marketing and business practices. It has helped them be the team that is never fazed, never limited, never out.

And yet, on Thursday night, it had another meaning, perhaps. Maybe this time, it was this now-storied organization, this incredible trio of champions that had been struck by the hundred and first blow. Finally, after all their success, after all their resilience, after so many years, the rock cracked.

The players, of course, wouldn't comment on the future after the game, the wound too fresh, the pain too real.

"It's not the moment," Manu Ginobili said, after committing four key turnovers in the fourth quarter.

"Can't believe you're asking that question," Tony Parker barked to the press conference, "It's been five, six years you're saying we're too old. I'm not going to answer that."

Duncan said he expects to be back, that he doesn't plan on retiring "right now."

"Probably for me, Game 7 is always going to haunt me," he said.

It's evident there must be change, even if all the key players do return. Ginobili, despite 18 points on 12 shots, cannot be considered part of the "Big 3" anymore. Kawhi Leonard has filled that role, and his 19-point, 16-rebound performance on Thursday night is the strongest indication there is that he's ready to rise to that level.

Duncan played at an MVP-caliber level this season, but you can only hold off Father Time so long. Parker is younger, but the miles are so great. And Ginobili more than anyone seems as if the game has passed him by, that he cannot be relied upon to the degree that he was.

There might have to be change, and the question will be if the rock has cracked not just for this season but for this team, this era, this franchise. If things will ever be the same, even if the stone holds together another year.

Teams change. They fall apart, rebuild, are torn down again, like matter rearranging in the process of decay and rebirth. Nothing lasts forever.

Yet even as this loss hangs over them like a shroud, and even as the reality that finally, their hammer was not enough to crack the stone, each player will take from this remarkable series in an unbelievable season the knowledge that the process was true. It's how to be successful in this league, in this sport, in life.

"I love that quote on the wall," Matt Bonner told me several weeks ago as the Spurs clinched their Western Conference title. "Anytime you start to get frustrated, that saying gets through and gets you back on track. We're pounding the rock. We're not done pounding the rock. There's still more work to do. Our three leaders carry that mindset with them in everything they do."

"It's something that you have to work hard every day," Boris Diaw said. "Some days it feels like it's not working, but eventually it's going to pay off. It's motivation to keep working, to keep doing what you do, and you're going to receive the reward."

Maybe this is the end. Maybe the Big 3 era really is over, change is coming, and nothing will ever be the same for the San Antonio Spurs again. But the players who were a part of the true majesty of one of the greatest runs in sports history, crossing five Finals appearances across 14 years will not forget the lessons that they learned every day while going to work in the shadow of that quote on the wall.

"It's a quote that's used often, especially with this team. Throughout the year with so many games, not every game is going to go like you expect it to. Some nights, you're going to make shots. Some nights, you're going to miss shots. But the most important thing is to keep fighting, no matter how much you're down or how close the game is, or how much you're struggling. You never know what's going to happen if you keep pounding on that rock.

"Might take the 100th or 1,000th strike. It might strike early. But sometimes it takes longer. You just keep pounding that rock." -- Spurs guard Danny Green