NEW YORK (AP) The surging Columbus Blue Jackets received a dose of stellar play from a rookie goaltender and a two-goal boost from returning Oliver Bjorkstrand to forge another close victory.

Bjorkstrand scored twice, including with 26.5 seconds left, to lift the Blue Jackets over the New York Rangers 2-1 Sunday night for their fifth straight win.

Bjorkstrand came back after missing 13 games with an oblique injury. He tied it 6:08 into the third period, then put the winner past goalie Igor Shesterkin for his 14th goal of the season, finishing a 3-on-2 break with assists credited to Pierre-Luc Dubois and Seth Jones.

Columbus rookie Matiss Kivlenieks made his first NHL start and stopped 31 shots. The surging Blue Jackets are 15-2-4 since Dec. 9 and 8-1-3 in their last 12 road games.

''We were as calm as we could be,'' Blue Jackets coach John Tortorella said. ''Our goalie made key saves and our team had a lot of energy. We're just trying to ride this wave.''

Rangers defenseman Brady Skjei opened the scoring at 18:23 of the first period, eight seconds after his high-sticking penalty - the only infraction called during the game - had expired. A long pass from fellow defenseman Jacob Trouba went past Skjei's outstretched stick, but he managed to scoop up the ricochet off the boards and beat Kivlenieks for his seventh goal. Trouba had the only assist.

The 23-year-old Kivlenieks, from Riga, Latvia, was making his debut after fellow Latvian goalie Elvis Merzlikins blanked the New Jersey Devils 5-0 in Columbus on Saturday. Kivlenieks became the fifth Latvian goaltender to play in the NHL.

''I was a little nervous. I was trying to treat it like any other hockey game,'' Kivlenieks said. ''All that matters is that we got two points. I'm really happy about it.''

The Rangers were coming off two straight wins over the Islanders, 3-2 at Nassau Coliseum on Thursday and a 6-2 drubbing Madison Square Garden on Monday. This performance against another division rival proved frustrating, leaving coach David Quinn vexed as his young club tries to stay in the playoff race.

''We pretty much got what we deserved when the night ended,'' Quinn said.

Kivlenieks, who was 7-7-2 with AHL Cleveland this season, played a strong second period. He denied Tony DeAngelo and Brendan Smith on point-blank chances in front. He also kept former Blue Jacket Artemi Panarin - who leads the Rangers with 68 points in his first season since leaving Columbus as a free agent - from getting on the scoresheet.

''Honestly I still can't believe it happened. It's always been a dream'' a beaming Kivlenieks added after making 14 saves in the third period. ''The guys played really great in front of me.''

With the win, the Blue Jackets moved within one point of the third-place Islanders in the Metropolitan Division, remarkable considering where they were in the standings just over a month ago.

''We're just taking it day by day and game by game,'' said Jones, who leads Columbus with 22 assists. ''We're playing with confidence.''

Shesterkin made 29 saves in his third career start. He won his previous two against Colorado and New Jersey, both at home, earlier this month.

NOTES: The Rangers scratched Fs Phillip DiGiuseppe and Micheal Haley and G Alexandar Georgiev. ... The Blue Jackets scratched F Sonny Milano, D Adam Clendening and injured G Joonas Korpisalo. ... The teams meet again Feb. 14 in Columbus and March 24 in New York. ... The Rangers are the only team with eight players age 21 or younger to appear in at least one game this season. ... Rangers defensemen have 133 points (38 goals, 95 assists) this season, the most goals and points by defensemen on any team. 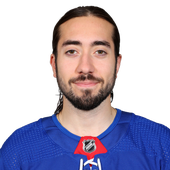