WASHINGTON (AP) Alex Ovechkin and Washington's best players got going just in time to put together their best period of the season and avoid what would have been the Capitals' worst four-game start in nearly a decade.

Ovechkin scored twice, and the Capitals rallied past old coach Bruce Boudreau and the Vancouver Canucks 6-4 on Monday night for their second consecutive victory. They trailed by two going into the third period before turning the game around.

''We find ourselves down going into the third period and turning the puck over too much and it keeps us from playing fast and getting into their end,'' coach Peter Laviolette said. ''And I thought in the third period, we straightened out and played a really good third period. ... We were on the attacking, and we were pushing the whole time.''

Ovechkin's first two goals of the season, 56 seconds in and with 2:58 left in regulation, bookended the Capitals blowing a lead and storming back. Dylan Strome got the comeback started with a power-play goal early in the third, continuing his strong start with his new team, before John Carlson tied it and Conor Sheary put the Capitals ahead.

''It was a great response by everybody,'' Ovechkin said. ''You can see when we play the right way it doesn't matter what kind of score, we can always bounce back and win the game.''

Winger Connor Brown, a newcomer like Strome, exited with an apparent right leg injury after going into the boards awkwardly early in the third. The team said Brown had a lower-body injury, and Laviolette only added that an evaluation was ongoing.

Down a skater, the Capitals (2-2-0) were still able to get back into the game with goals from Carlson with 11:17 left in regulation and Sheary with 7:16 left.

They spoiled Boudreau's latest chance to reach 600 career regular-season NHL wins. Despite a goal and two assists from Elias Pettersson, the Canucks blew a two-goal advantage for a third consecutive game, all losses.

Vancouver became the first team to lose each of its first three after enjoying a multigoal lead in each game. Boudreau said it would be fair to call the Canucks ''mentally weak'' at this stage.

Washington's Darcy Kuemper rebounded well after whiffing on the puck on a bad bounce to give Pettersson a gift goal with 7.3 seconds left in the first. He finished with 26 saves.

Ovechkin joked of the rough bounce: ''Welcome to Capital One ice,'' adding sarcastically, ''Boards and ice is probably top in the league.''

Lars Eller also scored for Washington, taking advantage of a big bounce off the end boards 8 seconds into the second. Evgeny Kuznetsov had three assists hours after missing the morning skate and being considered a game-time decision.

Vancouver's Thatcher Demko allowed six goals on 30 shots. The Canucks had a players-only meeting after the loss, which Boudreau acknowledged is ''not usually'' a good sign.

NOTES: Ovechkin's goal was the 11th of his career in the opening minute of regulation. Only Sidney Crosby and Mark Messier with 13 and Dave Taylor, Phil Esposito and Gordie Howe with 12 have more. ... Canucks defenseman Tucker Poolman was out with an undisclosed injury.

Canucks: Make their fourth stop on a five-game trip Tuesday night at the Columbus Blue Jackets.

Capitals: Travel to Canada's capital to face the Ottawa Senators on Thursday night.

VANCanucks
WASCapitals
STARS OF THE GAME 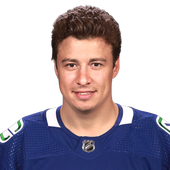