BOSTON (AP) Jake DeBrusk scored 21 seconds into the game and added an empty-netter as the Boston Bruins beat the Florida Panthers 5-3 on Monday night.

DeBrusk also assisted on the go-ahead goal, splitting a pair of defenders in a race for the puck and feeding Patrice Bergeron with a behind-the-back pass to put Boston up 2-1 with 7:25 left in the second period.

DeBrusk, who turned 26 on Monday, said he wasn't even sure in the morning he'd be able to play because of an injury he suffered in the season-opener that kept him out of Boston's win over Arizona on Saturday.

''It was nice to contribute, obviously. That's the best way to help the team,'' DeBrusk said. ''That early in the game to kind of set the tone, that's what we all want to do and I was lucky enough to kind of get a lucky one there.''

Bergeron finished with a goal and assist for the Bruins, who improved to 3-0-0 under new coach Jim Montgomery and handed Florida its first loss of the season after opening with two wins. David Pastrnak and Trent Frederic also scored for Boston. Linus Ullmark stopped 36 shots.

Gustav Forsling had a goal and an assist for Florida, which never recovered after falling behind 4-1 in the third. Sam Bennett and Colin White also scored for Florida. Matthew Tkachuk had an assist, giving him two goals and two assists in three games with the Panthers, who picked him up in an offseason trade with Calgary. Sergei Bobrovsky had 29 saves.

The Panthers were already without defenseman Brandon Montour with an upper-body injury and lost defenseman Aaron Eckblad midway through the second period.

Coach Paul Maurice, hired to take over the Panthers in June, said he was impressed with his short-handed club's tenacity on Monday night and likes what he has seen thus far. Florida opened the season with three straight road games and went 2-1 on the trip.

Pastrnak hit the side of an empty net with about 3:20 left to play after the Panthers, down two goals, pulled Bobrovsky for an extra skater while on a power-play. White scored with 1:37 left to pull the Panthers to 4-3, but DeBrusk scored his empty-net goal for the Bruins just 34 seconds later.

DeBrusk put Boston up 1-0 in the opening minute of the game on wrist shot from the right circle that seemed to catch Bobrovsky by surprise.

Tkachuk helped Florida tie it with an assist on Bennett's goal, feeding him a pass for an easy tip-in 4 1/2 minutes into the second.

Midway through the period, Tkchuk got the Bruins' attention again after a big hit at center ice and a subsequent scrum. Nick Foligno tried to get at Tkachuk but was held back. Boston's Dan Renouf then tried to engage the new Florida forward but was also contained as the officials kept it from escalating.

Tkachuk recived a double-minor for roughing, Foligno went off for roughing and and Boston's Tomas Nosek picked up a minor for kneeing Rudolf Balcers on the initial hit.

''We had everybody in there,'' Montgomery said. ''We were a pack of wolves in there together and after that I thought we had our best three minutes of the game - and we were down to three lines. So I think it speaks volumes about how hard they play for each other.''

David Krejci drew an interference penalty on Forsling after getting tripped up in front of the Florida net during an extended possession for the Bruins in the Panthers' zone. Just after the penalty ended, Bergeron fed Pastrnak with a pass back inside the Florida zone and Pastrnak took it from there, slipping the puck between Marc Staal's skates and getting in alone on Bobvrosky for his second goal of the season.

NOTES: Boston has 16 goals scored by 12 different players in its first three games. ... DeBrusk's goal was his first of the season and gave him 93 for his career. ... Maurice said Ekblad will be evaluated on Tuesday.

Bruins: At Ottawa on Tuesday night.

FLAPanthers
BOSBruins
STARS OF THE GAME 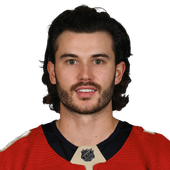