ST. PAUL, Minn. (AP) Colorado's stars have picked up where they left off last season, even with the captain sidelined.

The defending champion Avalanche are a lot to defend, a vital trait that has so far eluded the division rival Minnesota Wild.

Mikko Rantanen scored the go-ahead goal midway through the second period and Nathan Mackinnon and Valeri Nichushkin each had a goal and two assists for the Avalanche, who beat Minnesota 6-3 on Monday night to keep the Wild winless.

Ben Meyers and Samuel Girard scored in the first period for the Avalanche to put the first start for Wild goalie Filip Gustavsson with his new team in immediate trouble. Josh Manson added an insurance goal for the Avs in the third period.

Mackinnon (two goals and five assists), Nichushkin (four goals, two assists) and Rantanen (one goal, five assists) have combined for 19 points in three games. The Avs have won twice, with captain Gabriel Landeskog still out with a lower body injury.

''All of our big guys have been kind of carrying the load here so far. Hopefully we'll be able to spread it out here a little bit as we go on,'' coach Jared Bednar said.

Kirill Kaprizov's second score of the game brought the Wild back within one a few minutes later, but Alexandar Georgiev stayed strong down the stretch in Colorado's net and finished with 36 saves. After Freddy Gaudreau missed an open net on a short-handed rush, Mackinnon scored on the power play on the other end to seal it.

''He's playing his game - playing fast and heavy and smart and making nice plays and getting rewarded for it,'' center J.T. Compher said. ''Whether he gets points or not, he's driving the bus and we try to feed off that.''

Joel Eriksson Ek had the tying goal on a power play redirection in the second period and Calen Addison had three primary assists, but the Wild (0-3-0) saw their goals-against total spike to 20. Gustavsson stopped 32 shots.

After allowing 14 goals over their first two games, the most in any such stretch in franchise history, the Wild badly needed every skater to sharpen their play and improve their decision-making in the defensive zone. Facing the defending Stanley Cup champion Avalanche was far from the ideal scenario for this test.

Minnesota's season started with a 7-3 defeat by to the New York Rangers on Thursday. After Marc-Andre Fleury allowed 11 goals on 49 shots over his first four periods, he was pulled at the first intermission in a 7-6 loss to Los Angeles on Saturday.

The Kings scored three times in 20 shots on Gustavsson, who was acquired in a trade with Ottawa when Wild general manager Bill Guerin decided not to put Fleury in a job share and dealt Cam Talbot to the Senators.

Gustavsson never saw the first goal, just 3:30 into the game when Erik Johnson ping-ponged a shot off the stick of Kurtis MacDermid that hit Meyers with his back to the net in traffic in the circle.

Johnson flashed a surprised smile at his teammates in a moment of uncertainty about the celebration, but the rookie Meyers - who played in five games for the Avs last spring after leaving the University of Minnesota - was credited with his second career goal in his home state.

Girard muscled a backhander through traffic after outmuscling former teammate Tyson Jost for the puck, a bleeder that trickled into the net. The 24-year-old Gustavsson had trouble controlling pucks, most egregiously when a dump-in by Mackinnon slipped out of his grasp to allow Rantanen to swoop in for the tap-in and a 3-2 lead midway through the second period.

''We've been behind every single game and you're pushing, so your defensive hockey, it lacks because you're thinking offense,'' Evason said. ''But that's not to say it's an excuse. You still have to freaking defend, right? You still have to keep the puck out of our net.''

Evason scratched rookie Marco Rossi, and his replacement Mason Shaw produced plenty of energy on the fourth line wing. Jost moved up to the first line to center Kaprizov and Mats Zuccarello, dropping Ryan Hartman down to the right wing on Eriksson Ek's line. That's the spot normally occupied by Jordan Greenway, who has not played while recovering from upper body surgery.

The Avalanche return home to face Winnipeg on Wednesday.

The Wild finish their season-opening four-game homestand against Vancouver on Thursday. 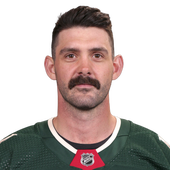