What better way to celebrate Halloween than by ranking the scariest mascots in college football?

Halloween is Friday and that means children all over the country will soon be donning costumes and ring your doorbell for a few hours demanding candy. If you do not comply with their demands, there's a chance they'll egg your house.

I'm not sure we thought this whole process through.

Aside from juvenile blackmail, Halloween is also about ghosts and goblins, witches and scary stories. So with that in mind, we here at Eye On College Football have decided to go ahead and rank the 10 scariest mascots in college football. The only rule being applied to this list is that it won't feature live mascots. Only the people-in-costumes variety because, well, it's Halloween.

Here are the 10 mascots you definitely would not want ringing your doorbell. 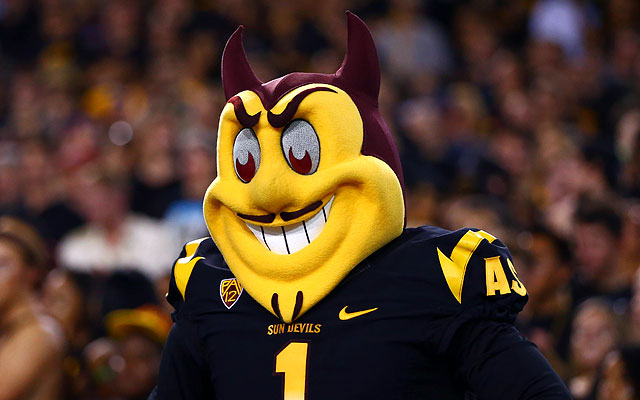 Sparky actually looks like a Halloween costume. He's also a devil, and devils are bad. Just look into those big, dead eyes of his. Those eyes say, "Hello, I'm about to gut you with this pitchfork and spend the next hour laughing about it." 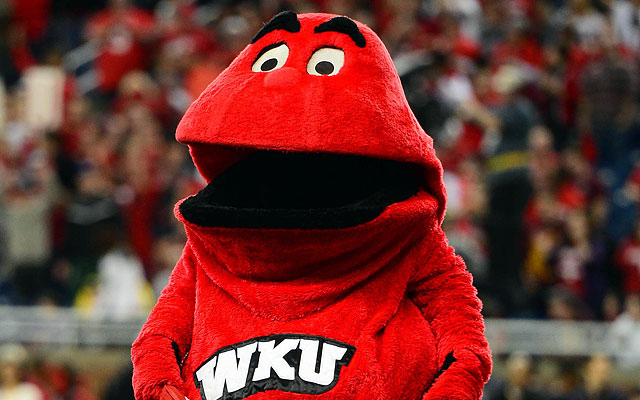 The scary thing about Big Red is that I don't know what the hell it is. It's human nature to fear the unknown, and Big Red is definitely unknown. He could be a gelatinous blob of death, or he could just be the byproduct of people lacking imagination. The problem is you won't know for sure...until it's too late. 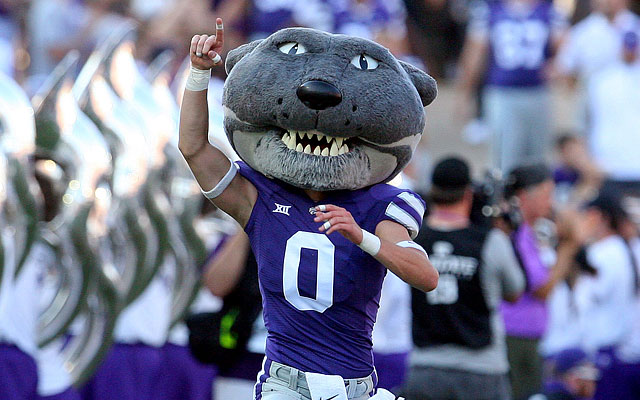 Simply put, Willie the Wildcat is a crime against nature. He's the result of some mad scientist experiment gone wrong. Sure, Kansas State says he's a wildcat, and he has the head of a cat, but he has the body of a human. Cats can be real jerks, but this is a cat with opposable thumbs. That means it can use a weapon when it wants to. If you have ever owned a cat, you know for a fact that it has wanted to kill you at least 100 times. The difference is Willie can actually get it done. 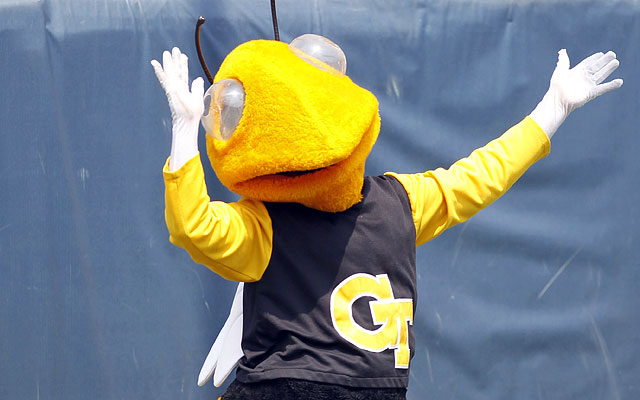 Buzz is a yellow jacket. A yellow jacket is just another name for a wasp. I hate wasps. I hate bees, too, but at least if a bee stings you it's a last ditch resort that will lead to the bee's death, so you get the last laugh. But the wasp can just keep stinging you, and they'll swarm together to do it until you're dead. 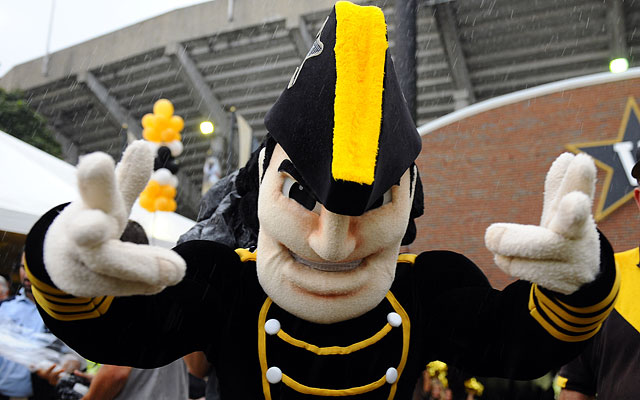 Ever wanted to know what a sea captain whose been dead for 100 years and just washed up on shore would look like? Good news! Vanderbilt's Mr. C will show you! Look at him. If he were any paler he'd be translucent, and if he were translucent you couldn't see him and he'd sneak up on you while you're making your way to the bathroom in the middle of the night. The startle of it all could lead to you stubbing your toe, and stubbing your toe sucks. And when you do, there will be Mr. C staring at you with that creepy smile. Jerk. 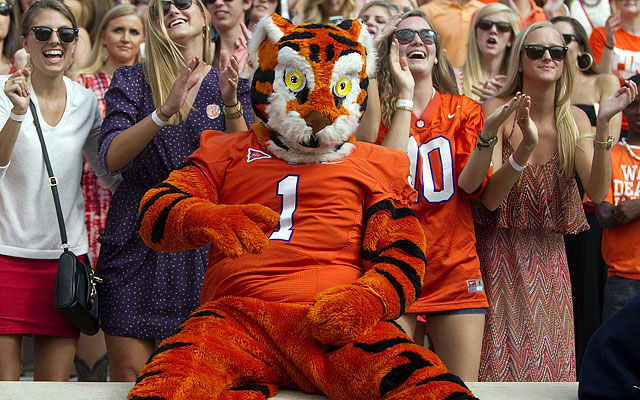 Have you ever come across a drug addict? I don't mean your friend from high school who smoked a lot of pot, I mean the drug addict that is strung out on crystal meth and would literally do anything they had to in order to get more meth. Steal, stab, kill, whatever it took. Well, look into the Clemson Tiger's eyes and tell me this guy isn't about to steal and then sell your television for some ice. Oh, and not only does it have the unpredictable nature of a tweaker, but it's a tiger, too. Get the hell out of here, Clemson Tiger. 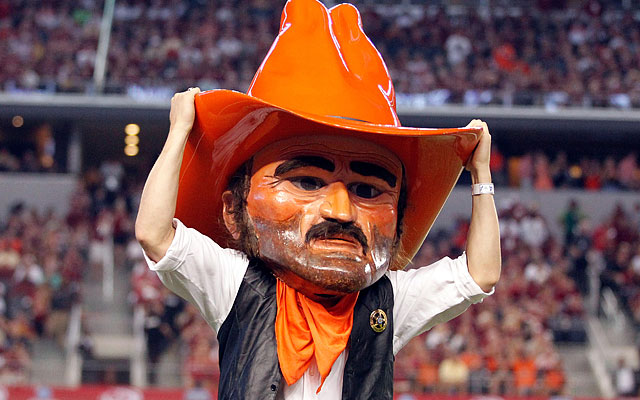 I bet Pistol Pete is a nice guy, just a friendly old cowboy who wants to be your friend...or maybe that's just what he wants you to think. Look into that haggard, weather-beaten face of his. There's a secret behind that face. A dark secret. The kind of secret that you aren't meant to figure out, and Pistol Pete would do anything to keep you from learning it, including kill you. You wouldn't be the first person he's killed, nor would you be the last.

Remember the classic of American cinema known as "Teenage Mutant Ninja Turtles II: The Secret of the Ooze?" Well, Testudo is the ooze's secret -- a giant, mutated turtle with huge muscles that can rip you in half with either his arms or his powerful jaw. He may not have awesome ninja skills, but let's be real, he doesn't need them. There's nothing subtle about what this thing wants, and what it wants is to crack open your skull and feast on the gooey insides. 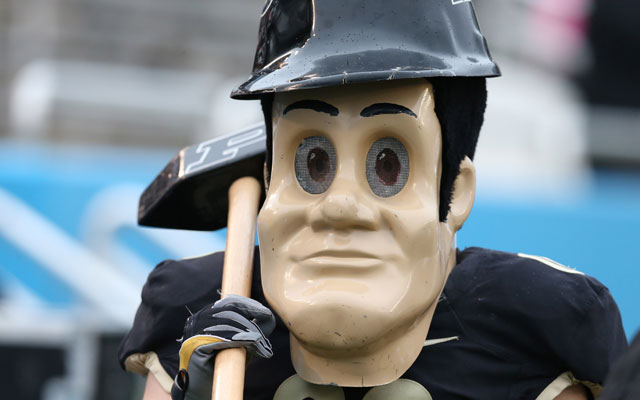 Just imagine being anywhere in the world, doing whatever, and then accidentally stumbling upon this guy. Those giant, soulless eyes staring at you. That strange, evil smile. His giant hammer. Try and tell me that if you ran into this guy in a dark alley you wouldn't run the other way while vacating your bowels. You know you would. Hell, maybe you have. Congratulations on surviving the encounter. Many haven't.

10 college football teams that can make noise in 2021