The Cubs won for the first time in 13 games, while the Braves lost for the eighth straight time. Meanwhile, Mark Trumbo's walk-off homer gave the Angels' their seventh straight victory. 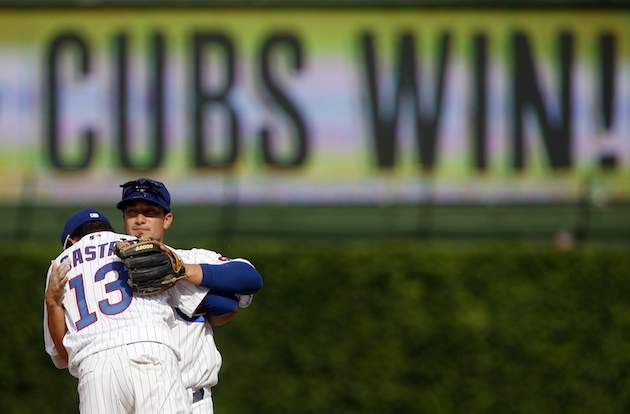 Full Monday scoreboard with box scores and recaps for all games

Mark Trumbo, Angels: Trumbo hit the third pitch he saw from Yankees reliever Cory Wade deep into the left-field seats at Angel Stadium of Anaheim for a walk-off home run. Trumbo had three hits, finishing a single shy of the cycle. The Angels have won seven straight, with Trumbo homering in each of the last two.

Chris Sale, White Sox: The left-hander struck out 15 Rays and allowed just three hits in 7 1/3 innings. Sale's strikeout total was the second-highest for the White Sox since 1918 and 80 of his 113 pitches were for strikes. With a 6-2 record, he's second behind Justin Verlander with a 2.34 ERA.

Atlanta Braves: Now that the Cubs' 12-game losing streak is over, the Braves own the game's longest losing streak at eight. Atlanta started its slide last Monday in Cincinnati as the National League East leaders and are tied for last place in the division following the latest loss, four games behind the Nationals along with the Phillies. Not only has Atlanta dropped eight straight overall, they've also lost all eight of the games they've played on Mondays this season.

Ryan Cook, A's: The reliever hadn't allowed a run in 23 innings entering Monday's game -- and then he was touched up for two by the lowly Twins. Coming into Monday's game in the eighth inning with a one-run lead, Cook retired the first batter he faced before giving up a single to Joe Mauer, walking Josh Willingham and then allowing a double to Justin Morneau for the first run he'd allowed all season. Ryan Doumit then hit a sacrifice fly to give Minnesota the lead.

Jed Lawrie, Astros: With the score tied with two outs in the eighth inning, Lawrie had a chance to end the inning when he fielded Dexter Fowler's grounder, flipping the ball to Jose Altuve at second to try to get pinch-runner Jeremy Guthrie for the force. Instead of getting the ball to Altuve, his underhand toss hit Guthrie on his right foot and bounded into the outfield, allowing Guthrie to go to third and Fowler to second. Jordan Pacheco followed with a bloop single, giving the Rockies a 9-7 win in the first game of a doubleheader.

Time for a new kind of streak: Fresh off a 12-game losing streak, the Cubs have a chance to start a winning streak on Tuesday. Right-hander Jeff Samardzija has been impressive for the Cubs this season -- and even better at Wrigley Field. Samardzija is 4-3 with a 3.00 ERA overall and 2-1 with a 1.52 ERA in four starts at home. 2:20 p.m. ET

Verlander time: Every time Justin Verlander takes the mound, he's worth watching. Tuesday he faces the Red Sox at Fenway Park, opposite Daniel Bard. Verlander is 2-1 with a 3.19 ERA in five career starts at Fenway. 7:10 p.m. ET

Welcome back: Matt Kemp is expected to be activated for Tuesday's game against the Brewers. Kemp had been hobbled much of the last month with a strained left hamstring, first trying to play through the injury and then going on the DL. It appears that worked. In two games for Triple-A Albuquerque, Kemp went 5 for 7 with two homers and a double. That's not a nice way to welcome Brewers right-hander Michael Fiers, who will be making his first big-league start. Los Angeles right-hander Nathan Eovaldi makes his 2012 debut for the Dodgers. 10:10 p.m. ET

Tuesday's probable pitchers for all games

• More Memorial Day: It's not Memorial Day anymore, but we can always remember those who gave their lives for our country. Gary Cieradkowski of the Infinite Card Set did this beautiful card of Bill Niemeyer, a minor-league pitcher who died at the Battle of the Bulge. He also passed along the link to the wonderful website, Baseball in Wartime. Be sure to check it out.

• Are umpires biased against the Blue Jays? That's the accusation some are making as a result of several calls that haven't gone Toronto's way since Brett Lawrie tossed his helmet, hitting umpire Bill Miller. [Slam Sports]

• Freeman frustrated: It's not as simple as a trip to LensCrafters for Braves first baseman Freddie Freeman, who is expecting a new pair of goggles to arrive in the mail today. Freeman has had trouble with his eyes being too dry and has not been able to wear contact lenses. He's  been fitted for goggles, but because he needs ones that can wrap around his eyes for his peripheral vision, it's taking longer to have them made. Freeman ordered one pair from Oakley and another from Under Armour to have a choice when they do arrive. [MLB.com]

• A game in Japan: A writer describes his first baseball game in Tokyo. [Arizona Republic]

• Between two palm trees: Dodgers catcher A.J. Ellis does his best Zach Galifianakis with a takeoff of Between Two Ferns with Between Two Palm Trees, complete with guest Clayton Kershaw.