MONTREAL (AP) Josh Anderson scored with 19 seconds left to give the Montreal Canadiens a 4-3 victory over the Toronto Maple Leafs on Wednesday night in the opener for both teams.

''Winning cures a lot. Obviously, we hadn't won yet if you count the exhibition games,'' Montreal coach Martin St. Louis said. ''We hadn't had much of our group all together and I know we have injuries on the back end, but I thought the kids played really, really well.''

Cole Caufield scored twice and Sean Monahan had his first goal for the Canadiens after coming over in an offseason deal with Calgary. Jake Allen stopped a penalty shot and finished with 29 saves.

Alexander Kerfoot was given the penalty shot when Arber Xhekaj held the center on a breakaway. Under a rain of boos, Kerfoot skated down the ice only to be denied by Allen.

''It wasn't a perfect game,'' St. Louis said. ''There's no perfect game, it's just about finding ways in this league and I thought the guys fought tonight and found a way.''

Monahan gave Montreal its first lead of the game when he grabbed a loose puck in the slot and beat Murray with 2:30 left. Nylander tied it with 1:50 remaining.

''There was nothing wrong with our effort, it was just careless,'' Maple Leafs coach Sheldon Keefe. ''I expect more, our group should expect more. It was not good enough.''

After missing the entire pre-season with an oblique injury, John Tavares made his return to the Maple Leafs. The captain centered the second line alongside Nylander and Denis Malgin and picked up two assists.

Canadiens: At Detroit on Friday night. 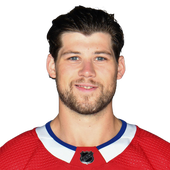