RALEIGH, N.C. (AP) Martin Necas had a goal and two assists and Carolina Hurricanes took time to get in the groove before beating Columbus Blue Jackets 4-1 in the season opener for both teams Wednesday night.

Patrick Laine had the Columbus goal, giving the Blue Jackets a brief second-period lead. He departed later in the period with an upper-body injury.

Frederik Andersen made 31 saves for the Hurricanes.

Columbus turned to Daniil Tarasov as the surprise opening-night starter because top netminder Elvis Merzilikins was ill. Tarasov, who appeared in his fifth NHL game, made 39 saves.

''We were fine through two (periods). We really were,'' Blue Jackets coach Brad Larsen said. ''Then they took over. We didn't have a response.''

The Hurricanes would like to churn out another stellar opening stretch. They won their first nine games last season.

''The third period we started looking a little more like how we want to do it,'' Carolina coach Rod Brind'Amour said. ''The good news for me is we got the win, but we've got a ton to work on.''

Necas began his points-producing spree by assisting on Skjei's go-ahead goal with 1:30 to play in the second period. The Hurricanes were in transition, but Skjei spotted up inside the blueline and Necas delivered a pass back to him to set up the shot.

Necas then scored 6:29 into the third period off a rebound. Less than three minutes later, he recorded the primary assist on Svechnikov's goal.

''We got kind of in the flow and playing our game,'' Necas said.

Laine scored the first goal 11 seconds into the second period following a Carolina turnover. He has 10 goals in 20 career games against Carolina.

The injury to Laine put a damper on the hype of a new season after he produced a point per game (56 in 56 games) last season.

Larsen said navigating injuries is part of getting through a season.

''We'll move forward and see where it goes,'' he said.

A few players made debuts with their respective teams.

Six-time All-Star Johnny Gaudreau was in the Columbus lineup. He also was groomed alongside Laine in the preseason.

''They were building something,'' Larsen said of the linemates.

Gaudreau said playing for a new team after a career exclusively with the Calgary Flames brought an array of emotions.

''Wanted to get off to the right start and get a win,'' he said.

Meanwhile, defenseman Brent Burns played in his 680th consecutive game - but first for Carolina - to move into sole possession for the 10th longest streak in NHL history.

Paul Stastny, another veteran in his first game for the Hurricanes, assisted on the team's fourth goal. He's beginning his 17th NHL season. He has 16 points in season-opening games in his career.

LET HIM HEAR IT

Brind'Amour, who's starting his fifth season as coach, received a tremendous ovation during pregame introductions. The captain of the franchise's 2006 Stanley Cup championship team has directed the team to consecutive division championships as coach.

''I wasn't expecting that. It means a lot to me, what I can I say,'' Brind'Amour said. ''When you get that kind of ovation, it's special. We've got a great thing here and I appreciate the people.'' 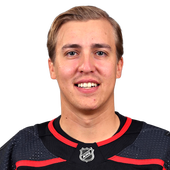