Losing a game by 38 points isn't usually something you want to celebrate, but don't tell that to the Colts, who decided to commemorate their 45-7 AFC title game loss by hanging an "AFC Finalist" banner at Lucas Oil Stadium this week.

If you think hanging up a banner that says "AFC Finalist" sounds ridiculous, you're not the only one, almost everyone on Twitter seems to agree.

Dear @Colts Please take down that banner asap. Sincerely, All Colts fans with any self respect.

Colts hang AFC finalist banner. Congratulations on getting smoked 45-7 & putting a banner up to remind you how bad you lost

After hanging the banner, a few fans offered suggestions for other banners.

The Colts should hang a banner for every time they lose to the Patriots by less than 20.

We scored 3 points in the first quarter..... Gotta hang a banner. #Colts

The new banner is also forcing Colts fans to ask themselves existential questions.

#Colts fans - Is it time for a higher standard of banner? http://t.co/mqyPz98gzG pic.twitter.com/Gee2elLV8b

All the #Colts need to do now is raise a WE STARTED DEFLATEGATE banner.

The Colts hung a banner because the lost to the Patriots #FreeTomBrady pic.twitter.com/cLEYpky1BB

Colts have been doing that "finalist" banner thing for a long time now, for what it's worth. pic.twitter.com/MUAhIlzVy1

If the Colts need some banner-hanging advice, they could ask the Detroit Lions, who were neatly able to commemorate 14 playoff appearances on only two banners (picture via the Lions website). 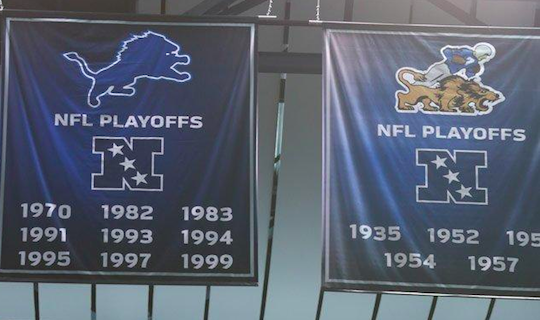 Report: Glennon in line to replace Jones (neck) vs. MIA