A document titled "Host City Bid Specifications and Requirements" which breaks down what cities are required to do before winning a Super Bowl, leaked over the weekend.

Super Bowl bids are unquestionably competitive. It's tough to become a finalist let alone land one, especially if you're a random, cold-weather city like Minneapolis. But the new home of the Vikings recently scored Super Bowl LII.

And the Minneapolis Star-Tribune revealed over the weekend how: a lot of concessions. The newspaper obtained and posted on their site a copy of the NFL's "Host City Bid Specifications and Requirements."

It shouldn't be a major surprise, but the NFL typically gets what it wants. Also: the Super Bowl functions as a gigantic corporate sponsorship fest. (No stunner there.)

A few interesting items that caught our eye while combing through the 153-page document. 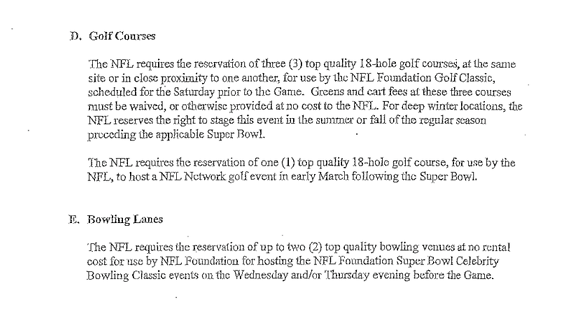 The Host Committee for Minneapolis told the Star-Tribune “while the Minnesota Super Bowl Bid Committee did not agree to all of the NFL’s Super Bowl bid specifications, the competitive bid remains private."

We don't know exactly what the Host Committee declined to accept, but it clearly didn't matter (or it wasn't that much) because the NFL ultimately selected their bid.

Could failing to agree to the NFL's bid specifications cost a host city a chance at a Super Bowl? Not, um, officially.

"There is tremendous value to a community in hosting an event of the Super Bowl’s magnitude and the competition to host one is significant,” NFL spokesman Brian McCarthy told the Tribune.

The reality is there are a ton of requirements on here, but it's not like Roger Goodell is demanding no brown M&M's in his party suite or anything.

A Super Bowl is a MASSIVE deal for a city and a week-long event that requires -- as you can tell -- years of planning. The NFL is a well-oiled ATM in its own right. It's hardly surprising they know how to maximize profit and streamline things during the Super Bowl bid process.

Beasley says he could retire over COVID restrictions

Mahomes weighs in on Mathieu's future in K.C.

AFC South: Each team's key player on a rookie contract