Matthews has scored those 16 goals in just 17 games played, and has scored 15 times in his last 13 contests. He has a 15-game points streak.

''The puck's going in the net right now and that's great, but the most important thing is that we're winning,'' Matthews said.

Toronto beat Ottawa for the second straight night after blowing a 5-1 lead in a 6-5 overtime loss in the series opener Monday night.

Mitch Marner had a goal and three assists, Joe Thornton a goal and two assists, William Nylander a goal and an assist, and John Tavares and Ilya Mikheyev also scored.

Michael Hutchinson made 34 saves for Toronto in place of No. 1 goalie Frederik Andersen, who had started 10 straight with Jack Campbell sidelined because of a leg injury. Joseph Woll backed up Hutchinson as the North Division leaders gave Andersen a break from having to dress.

''I thought he was really good,'' Toronto coach Sheldon Keefe said. ''He got better as the game wore on.''

Tim Stutzle had a goal and an assist for Ottawa, and Connor Brown and Drake Batherson also scored.

Marcus Hogberg allowed a goal on five shots before leaving the game with a lower-body injury midway through the first period. Matt Murray made 20 saves in relief.

''They got a couple early and we got away from the way we have to play,'' Senators coach D.J. Smith said. ''We got sloppy and just allowed them too much room.''

Toronto opened the scoring on its second power play of the night at 10:29 of the first when Matthews fired a shot through Hogberg.

Thornton, who had two goals disallowed Wednesday, finally got his third of the season late in the period when he redirected Jake Muzzin's point shot past Murray. 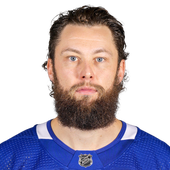