Jonas Brodin: The Calder candidate more people should be talking about

Jonas Brodin should be getting more attention when it comes to the NHL's rookie of the year race.

Thanks to their 2-0 win over the San Jose Sharks on Saturday afternoon the Minnesota Wild continued their quest to not only end a four-year playoff drought, but perhaps even win the Northwest Division title.

A lot of the credit has gone to their two big free agent signings over the summer, Zach Parise and Ryan Suter. And for good reason. Both have been great additions and are having the type of seasons that were expected when they signed their 13-year contracts back in July.

But even with the additions of the two best free agents on the market the Wild, a team that was among the worst in the NHL last season, still needed more (a lot more) if it wanted to get back to the playoffs for the first time since the 2007-08 season. And that's where a guy like Jonas Brodin comes in, the 19-year-old defenseman that's spent most of the season playing as Suter's partner on Minnesota's top defensive pairing.

He's a player that should probably getting more attention as a Calder Trophy candidate, and one that is playing a huge role for the surprising Wild. A role that is almost unheard of for a teenage defenseman.

Most teams treat rookie defensemen with kid gloves and play them in sheltered minutes where they're not asked to do too much defensively or go up against top-line players. This usually involves a lot of shifts starting in the offensive zone and coaches making an effort to avoid getting them out against other team's top players.

This is not the way Minnesota coach Mike Yeo has handled Brodin, the team's first-round pick (No. 10 overall) in 2011. He's currently playing the toughest minutes among all defensemen on the team during even-strength, and has spent more time on the penalty kill (more than two-and-a-half minutes per game) than he has on the power play (less than two minutes per game). He's also playing over 22 minutes per game, including an incredible 27-minute effort last Monday in a 3-1 win over the Canucks, a game that saw Brodin score his second goal of the season and record two shots on goal. Just to get a look at how tough his minutes are, let's look at the Wild's usage chart (via Greg Sinclair) for defenseman.

I've used these before, but in case you're not familiar with them the horizontal axis represents the percentage of shifts that start in the offensive zone and the vertical represents the quality of competition a player has faced. The closer you are to the top left, the harder the minutes. The closer to the bottom right, the more protected and sheltered the minutes. The blue bubbles represent players that are outshooting their opponents while the orange represent players getting outshot. 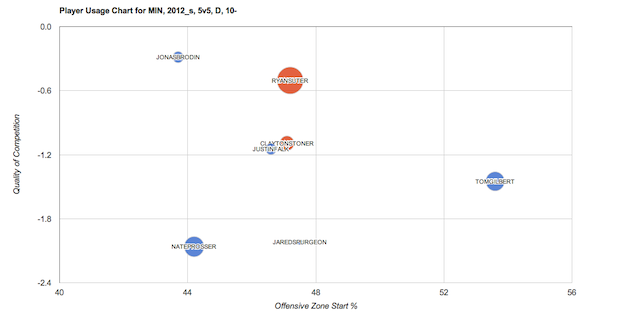 That's Brodin way up in the top left corner. He is not only playing the toughest minutes on the team among defensemen, the Wild spend more time in the offensive zone with him on the ice than they are without him on the ice. And that's good. That's very good.

It's also an incredible performance for a 19-year-old in his first year of pro hockey.

There is no doubt you can credit some of that performance (and maybe even a lot of it) to the presence of Suter on the ice with him most of the time. But he's actually been even better in the limited time he's been separated from Suter.

He should be getting considerably more attention when it comes to the Calder Trophy race than he currently is. Why isn't he getting more? Probably because he only has five points on the season and, whether it's right or wrong, the first thing we always look at is how many points a player has. There are currently 10 rookie defensemen with more than him, including Edmonton's Justin Schultz and Boston's Dougie Hamilton.

Just because it needs to be repeated: Brodin is playing top-pairing minutes and consistently being asked to go up against other team's best players while almost every other defensemen ahead of him in the scoring race (including Schultz and Hamilton) are not.

Here's another usage chart (one that I made) that features the top scoring rookie defensemen in the NHL this season and how they compare to Brodin (just in an effort to save space on the chart, I only labeled Brodin's point because the rest are just for comparison). 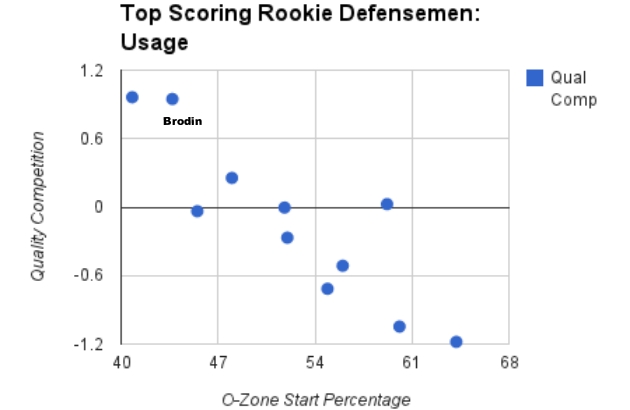 (Data for this chart via BehindTheNet.ca)

The only other defenseman that's even close to Brodin up in the top left corner is Dallas' Brenden Dillon.

It again shows just how much coaches typically shelter their young defensemen, and puts into at least a little perspective as to how much the Wild are trusting their prized rookie.

One of the biggest problems the Wild had last season was their inability to get the puck out of their own zone and establish their own offensive zone time. A lot of that fell on their defense. But going back to the middle of last season the Wild have completely overhauled that unit. They traded Nick Schultz, the type of "physical stay-at-home defensive-defenseman" people like drool over to Edmonton for Tom Gilbert, an underrated defenseman that can start the play out of his own zone and get it moving up the ice. They signed Suter away from Nashville, and had Brodin ready to jump into the lineup in a big role.

The Wild still aren't a great possession team, and it still gives me concern when considering them a top contender in the Western Conference (or even anything more than a top-seven or eight team once the season actually ends) but they're definitely better.

And guys like Jonas Brodin are a big reason why.

Even if he isn't getting the attention he should be getting.

NHL: No evidence that Evander Kane bet on games