New York Rangers goalie Henrik Lundqvist was furious on Thursday night. So he decided to knock the net over on purpose when he was facing a scoring chance.

PITTSBURGH -- It's been pretty well documented that the Pittsburgh Penguins have had a hard time scoring goals against Henrik Lundqvist and the New York Rangers recently. Entering their game on Thursday he had allowed just three goals on the Penguins' previous 119 shots against him as he played a major role in the past two playoff series between the two teams (with the Rangers winning both).

Needless to say, he kind of had their number.

He was going to continue his dominance against them if he refuses to let them play the way he did on Thursday night.

Early in the second period of what would turn out to be a 4-1 Penguins win, they were breaking in on a 2-on-1 rush when an angry Lundqvist turned around and intentionally overturned the net, bringing the play to a stop.

Rangers' Lundqvist gets the whistle he wanted, along with a penaltyhttps://t.co/yftaSkR8Ge

That is pretty much the exact same play David Leggio made in the AHL a couple of years ago when he was facing a 2-on-0 rush. It earned Lundqvist a two-minute minor for delay of game.

At the time Lundqvist seemed to be angry because his stick was knocked away from him just before that and didn't get a chance to recover it as the Penguins came in on their rush. He didn't have his stick because his own teammate, defenseman Ryan McDonagh, accidentally ran into him.

Rangers coach Alain Vigneault said after the game that his anger might have been directed at the fact that he was trying to get the attention of the referees to let them know he was injured.

"I think he was trying to telling the referee that he was hurt," Vigneault said when asked about the play.

"I don't know if signals didn't cross or what, but obviously the referee didn't pick up on it and he wasn't feeling right at that time. He decided to stay in then but he couldn't finish the game."

Lundqvist remained in the game after the collision with McDonagh and allowed three goals in just under three minutes. Even though he finished the period, he did not return for the start of the third period. He was replaced by backup Antti Raanta.

The official update from the team was that Lundqvist was dealing with some neck spasms and that the training staff wanted to play it safe with him.

Vigneault was asked if there was any talk of removing Lundqvist from the game after the collision.

"I didn't know," Vigneault said. "Nobody knew. I don't think Hank made it very clear to the referee at that time, but we knew when he came in from the second that he was having issues with his neck, but we didn't know at that time."

Lundqvist did not speak to the media after the game, but Rangers forward Derek Stepan said that was probably the angriest he has ever seen his goalie.

Penguins coach Mike Sullivan was also asked about the play and whether or not a two-minute penalty was enough. 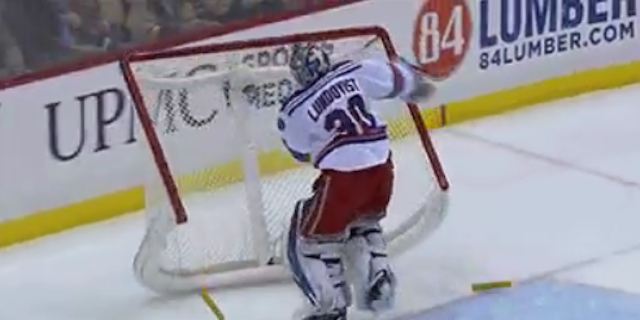 Sidney Crosby returns to practice ahead of Game 7