EDMONTON, Alberta (AP) Ryan O'Reilly had two goals and an assist as the St. Louis Blues beat the Vancouver Canucks 3-1 in Game 4 on Monday night to even in their first-round playoff series.

Alex Pietrangelo also scored and had an assist and David Perron had two assists for the defending Stanley Cup champion Blues. Jake Allen made 22 saves.

''It was nice to get on the board tonight,'' O'Reilly said.''I haven't been creating much offensively, so it was nice to put the puck in the back of the net, but it's just one game. I've got to be consistent with it.''

The teams were playing on a quick 24-hour turnaround after the Blues beat the Canucks 3-2 late Sunday night in overtime.

They outshot the Canucks 37-23, scored two goals with the man advantage to turn around what had been an abysmal 2-for-11 power play going into Game 4.

Most importantly, the Blues shut down a Canucks power play that had torched them for six goals in the first three games, but went 0 for 7 on this night.

''When we take care of the puck it's effective and it's hard on them,'' O'Reilly said. ''I think it was nice with an obviously emotional win last night. (We were) feeling good coming back into the rink again today and going right to our game again. I think that was a big factor. Obviously a lot of work left. We've got to stick to our structure.''

Pietrangelo said they've been working on fixing the penalty kill.

''We've been making adjustments as we go, just based on what they do,'' he said. ''Big thing for us is clearing the puck when he have an opportunity, so we were much better at that tonight.''

O'Reilly gave the Blues a 2-1 lead at 6:52 of the second as he took a pass out of the corner from Perron, walked out in front of the net and flicked a backhander into the top corner for the second two-goal playoff game of his career.

The Blues then caught a break on a two-man advantage. Pietrangelo zipped the puck through traffic in the crease and the puck hit Edler's stick and went in with 4:13 to go in the middle period.

Miller said the Blues are adapting to their power play,

O'Reilly, last year's Conn Smythe Trophy winner as the MVP in the Blues' Stanley Cup run, scored late in the first period on the power play - the first time the Blues have opened the scoring in the series. Pietrangelo sent a slap shot that missed the net, but the puck caromed straight back off the backboards to O'Reilly standing beside the goal post. O'Reilly elevated the puck from a sharp angle under the crossbar with 3:37 left.

Vancouver tied it just 40 seconds into the second period. Alex Edler wristed the puck from the blue line. Miller redirected it and it bounced past Allen for his fourth goal of the postseason.

The Blues have now won two straight after dropping five in a row in return-to-play action.

O'Reilly has three goals in the series. Perron recorded two assists and has registered a point in every game this series (two goals, four assists).

St. Louis won without winger Vladimir Tarasenko, who missed his second straight game. The NHL has not divulged the reason.

Vancouver defenseman Tyler Myers was also scratched for a second time. He fell awkwarly head-first into the boards late in Game 2.

NOTES: Allen started for the second consecutive game, replacing Jordan Binnington. ... Markstrom has played every minute for the Canucks through eight postseason games. ... Vancouver captain Bo Horv///at was kept off the scoresheet for a second consecutive game after lighting up the Blues for two goals in each of the first two contests. ... Canucks D Quinn Hughes also saw his streak snapped. The Calder candidate was going for a point in his seventh consecutive post-season game. The 20-year-old has one goal and eight assists. ... The Blues' power play, ranked third in the NHL during the regular season (24.3 per cent), finally got going, with two goals after going 2 for 11 in the first three games. 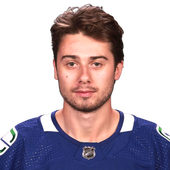