WINNIPEG, Manitoba (AP) Carey Price made 30 saves for his eighth career playoff shutout and the Montreal Canadiens beat the Winnipeg Jets 1-0 on Friday night to take a 2-0 lead in the second-round playoff series.

Tyler Toffoli scored a short-handed goal 1:41 into the second period.

''We're playing well on both sides of the puck,'' Price said. ''We're just making smart decisions and backing each other up all over the ice.''

Connor Hellebuyck made 23 saves for Winnipeg. The Jets were without suspended scoring leader Mark Scheifele. He was suspended for four games for charging into Canadiens forward Jake Evans in the final minute of Montreal's 5-3 victory Wednesday. Evans is sidelined indefinitely because of a concussion.

Pierre-Luc Dubois centered Winnipeg's top line with Kyle Connor on the left and captain Blake Wheeler on the other side. Jets center Paul Stastny missed his second game of the series because an undisclosed injury.

Game 3 is Sunday night in Montreal, with Game 4 set for Monday night.

''It's a challenge, for sure,'' Jets coach Paul Maurice said. ''We've been a better road team than we've been a home team all year. We've got some confidence going into the other team's building and there's a chance we might get Paul back, which will probably help our group up front.''

When the Canadiens return home, they'll also have fans in the stands. The club was the first NHL team in Canada to have a crowd this year, allowing 2,500 fans to attend Game 6 against the Toronto Maple Leafs after Quebec loosened restrictions. 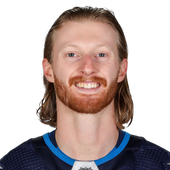