Staal scored his second goal of the game with 5:58 left and Minnesota overcame a sloppy third period to beat the Ottawa Senators 6-4 on Wednesday night.

Matt Dumba also scored twice as the Wild ended a two-game slide and won for the 12th time in 17 games. Mikael Granlund had three assists.

Down by three to start the final period, Ottawa's Thomas Chabot made it 4-2 with a short-handed goal 24 seconds in. Christian Jaros scored his first career goal midway through the period, and Colin White scored 83 seconds later to tie it and send Wild goaltender Devan Dubnyk to the bench.

''I've never made that change in my life. I don't want to make that change,'' Minnesota coach Bruce Boudreau said. ''But I thought we needed a break, and we needed something without calling a timeout. Sometimes you call a timeout and that energizes the other team because they think you're afraid.''

On the winner, Jason Zucker controlled the puck behind the Ottawa net before blindly sending a backhand pass in front. Charging down the slot, Staal put the puck behind Craig Anderson.

Eric Fehr added an empty-net goal, and Alex Stalock made one save down the stretch to get the win.

''It just kind of feels like a waste,'' said Chris Tierney, who also scored for Ottawa. ''You work that hard to get back and to give it up a couple minutes later is a sour feeling.''

This was the start of a four-game trip for the Senators.

The Wild were 2 for 4 on the power play against the league's worst short-handed team. Ottawa is at 67.1 percent on the penalty kill.

Staal scored Minnesota's second power-play goal on a one-timer from the slot six minutes into the second period with a follow-through that dropped him to one knee for a 3-0 lead.

Dumba scored on the man advantage with 9.9 seconds left in the first period.

Minnesota has scored at least one power-play goal in five straight games (seven goals) and 10 of its past 13, going 14 for 47 in that span.

''We showed that we can score goals, but we also showed that we're far away from having a defensive awareness and everything that we need to do defensively to be able to win games on a regular basis,'' Ottawa coach Guy Boucher said.

Scoring 3.59 goals per game, Ottawa trails only Tampa Bay, but the Senators allow a league-worst 4.27.

Tierney scored on a tap-in midway through the second period to get the Senators within 3-1, but Dumba countered with a long shot late in the second.

Dumba has five goals and two assists during a career high-tying five-game point streak. His 10 goals are a league high for defenseman, and his four power-play goals are also best by a blue liner. He's the sixth defenseman since 1989-90 with 10 or more goals through 22 team games, joining Shea Weber, Al MacInnis, Ray Bourque, Gary Suter and Jeff Brown.

The Wild and Senators each have a league-high 20 goals from their defensemen.

NOTES: Jordan Greenway also scored for Minnesota. . Dubnyk had 22 saves and Anderson had 28. ... Wild LW Marcus Foligno played. He left Sunday's game after taking a shot off the outside of his right leg that caused him to briefly lose feeling in the leg. ... Ottawa LW Mikkel Boedker recorded his 300th career point with an assist on Tierney's goal.

Senators: At Dallas on Friday night. 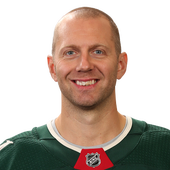