Game 2 is set for Friday night.

Horvat said the Canucks were ready to match the Blues' intensity.

''They won the cup for a reason, so we were ready for it,'' Horvat said. ''I thought we showed some good things tonight, some push-back and obviously scoring those big goals late was a huge clutch for us.

''And I couldn't be happier for Troy to get that one. I think I can speak for everybody (on that).''

Stecher broke a 2-2 tie in the third period when he raced down the right wing and sent a slap shot from the circle under the arm of St. Louis goalie Jordan Binnington.

Stecher then pointed to the sky to acknowledge his father, Peter, who passed away on Father's Day due to complications from diabetes.

''It's been tough obviously at certain moments throughout this process,'' the 26-year-old Stecher said.

''I had a couple of seconds there to reflect on my dad. The biggest thing was everybody showed their support on the bench instantly, kind of gave me a tap, and that kind of motivated me to keep it going.''

Jacob Markstrom made 29 stops for the win.

The Canucks were making their first playoff appearance since 2015, having defeated the Minnesota Wild in the qualifying round.

They never trailed in the game.

The teams swapped mirror-image power-play goals in the first period.

Horvat opened the scoring about five minutes in when he one-timed a feed from Hughes from the top of the left circle past Binnington.

St. Louis countered with under four minutes to go. Perron slapped a pass from Brayden Schenn from the top of the right circle high over the glove of Markstrom.

Vancouver regained the lead on the power play midway through the second period. Pettersson whipped the puck under the bar off a goalmouth scramble for his second goal.

The Blues tied it just over a minute later when Schwartz tipped the puck past pinching Canuck defenseman Chris Tanev at the Blues' blue line, then charged in on a breakaway and beat Markstrom with a nifty backhander through the pads.

After Stetcher's goal, Horvat turned Blues defenseman Vince Dunn inside out, raced in and fired a wrist shot past Binnington on the blocker side.

Miller added the fifth goal on the power play with less than 40 seconds left.

''I thought that we did a good job controlling the tempo and the play,'' Berube said. ''We had a lot of good looks. We're going to have to do a better job of getting more traffic in front of their goalie and getting some greasy goals.

The Canucks are winning with a mix of veterans and playoff newbies.

Pettersson, Brock Boeser, Jake Virtanen, Tyler Motte, Hughes, Stecher, Zack MacEwen, and Markstrom were regulars playing in their first playoff game (although technically they have playoff experience as the qualifying round statistics will count as post-season ones).

NOTES: St. Louis was the best in the Western Conference (42-19-10) and second overall in the league when the NHL suspended play March 12 due to the COVID-19 pandemic. In the return to action, they have squandered third-period leads in every game and have scored just six goals in three contests. ... History is on Vancouver's side. The teams have met three times in the playoffs (1995, 2003 and 2009). Each time the Canucks bounced the Blues out in the first round.

Game 2 is set for Friday night.

VANCanucks
STLBlues
STARS OF THE GAME 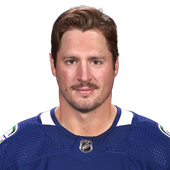