MONTREAL (AP) Joel Armia had two goals and an assist, Carey Price made 26 saves, and the Montreal Canadiens defeated the Winnipeg Jets 5-1 on Sunday night to take a 3-0 lead in their second-round playoff series.

Corey Perry, Artturi Lehkonen and Nick Suzuki also scored for the Canadiens, who have won six straight playoff games and haven't trailed in a game since losing Game 4 against Toronto in the first round. Montreal will try to complete a four-game sweep of Winnipeg on Monday night at home.

Armia, Perry and Eric Staal are listed as the Canadiens' fourth line, but the trio is a big reason why Montreal is one win from advancing to the third round.

''They're definitely not a fourth line,'' Montreal forward Brendan Gallagher said. ''They're playing big-boy hockey. They've been able to put together such long cycle shifts. They know what they are as a line and they just play to their strengths. Playoff hockey has certainly brought the best out of the three of them.''

The Canadiens lead a playoff series 3-0 for the first time since 2015, when they beat Ottawa in the opening round.

''We know the feeling of having your back against the wall,'' Suzuki said. ''We know they're going to be coming out with a lot of intensity.''

Adam Lowry scored for the Jets, and Connor Hellebuyck made 28 saves. Winnipeg was without top center Mark Scheifele, who is serving a four-game suspension for a charging penalty in the series opener. The Jets got Paul Stastny back after he missed the first two games with an undisclosed injury.

''You've got to keep believing,'' Jets captain Blake Wheeler said. ''There's some things in our game that we really like, some things we can clean up certainly, and hopefully we get a bounce to go our way. Hopefully one goes off of one of their sticks and ricochets into the net and we'll take a lead and see how it looks from there.''

Montreal welcomed another 2,500 fans Sunday night after hosting the first NHL crowd in Canada during the COVID-19 pandemic for Game 6 against Toronto.

The Canadiens opened the scoring at 4:45 of the first period on a grinding shift by the fourth line of Perry, Armia and Staal. Caught in the middle of a change following a turnover, the Jets were hemmed into their own end for 30 seconds before Perry's shot - the Canadiens' third chance of the sequence - went off Winnipeg defenseman Jordie Benn's stick and past Hellebuyck.

Lehkonen made it 2-0 at 9:24 of the second on a scramble after Phillip Danault hit the post.

The Jets went to the power play when the Canadiens were whistled for too many men, but Armia intercepted Stastny's pass and broke the other way on a 2-on-1 before delaying around a sliding Josh Morrissey to make it 3-0 at 13:41 of the second. It was Montreal's third short-handed goal of the playoffs.

Lowry broke Price's shutout streak at 99 minutes, 33 seconds with 2:09 left in the period when he took a pass from Mathieu Perreault and fired blocker side for his second.

Suzuki made it 4-1 on a power play at 8:52 of the third, and Armia added his second of the night into an empty net with Hellebuyck on the bench for an extra attacker and Montreal killing another penalty with 3:18 remaining.

Only four teams have come back from a 3-0 deficit to win a series in NHL history. The last was in 2014 when the Los Angeles Kings defeated the San Jose Sharks in the first round. Jets center Trevor Lewis and Canadiens winger Tyler Toffoli were both on that Kings team that would go on to win the franchise's second Stanley Cup.

NOTES: Canadiens great Guy Lafleur, who is battling lung cancer, was in attendance and got a rousing ovation from the crowd. ... The Canadian federal government announced Sunday it will issue a travel exemption to allow the winner of the North Division and an American counterpart to cross the border during the third round of the playoffs and, if necessary, the Stanley Cup final. ... Benn dressed for a second straight contest after Dylan DeMelo was hurt early in Game 1. 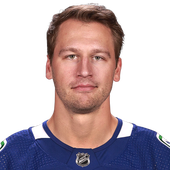