''He's unbelievable,'' Dahlin said of the second-year Finnish netminder. ''When we need him, he does those crazy saves. He's so calm in the net. He makes confidence in our D-zone a lot better. He's, for sure, a huge part of the success.''

Anders Bjork and Jeff Skinner also scored for the Sabres (9-15-4), who are 1-5-2 in their last eight games. Tage Thompson and Victor Olofsson each had two assists.

It was Luukkonen's fourth straight game this season (1-2-1) after Buffalo's goalie crew was hit by injuries and absences due to COVID-19 protocols.

''Of course the goals are always nice, but I think you can see (Dahlin) was playing really well today and breaking up the puck,'' the 22-year-old Luukkonen said. ''Defensively, too, it's nice to see that and I think everybody feels good when the guys play well.''

Pierre-Luc Dubois had a goal and an assist, and Nikolaj Ehlers also scored for the Jets. Connor Hellebuyck made 23 saves in Winnipeg's first game of a three-game homestand.

The Jets had three power plays, and managed one shot on goal in each. Buffalo was ranked 23rd on the penalty kill entering the game.

The game was tied 1-1 after the first period and the Sabres led 3-2 after the second.

''We were slow to start with,'' Jets coach Paul Maurice said. ''We skated for 15, 20 minutes and then slowed and could never get back up to speed.''

Buffalo went on the power play at 6:42 of the first period. Dahlin capitalized 32 seconds later with his fourth goal of the season off a high shot on the stick side of Hellebuyck.

The Jets tied it three minutes later after Dubois put a low shot past Luukkonen from outside the crease, scoring his 14th of the season at 10:04.

Winnipeg outshot the visitors 14-7 after the opening period.

''They're good players,'' Jets defenseman Nate Schmidt said of the Sabres. ''It's 100% on us - being ready for the game, being prepared and have the giddy-up, the jump to go the whole game.''

The Jets had the early power play 1:45 into the second, but managed one shot on goal.

Bjork got the go-ahead goal at 11:30 on a feed to the front of the net by Vinnie Hinostroza, who was playing his 300th NHL game.

''You leave a guy wide open in front of your net, you've got a problem,'' Maurice said.

Winnipeg responded 66 seconds later with Ehlers' 11th goal of the season, making it 2-2.

''You feel (bad) every time you lose a game, and in this league it doesn't matter who you're playing against,'' Ehlers said.

The Jets spent a lot of time after the goal in Buffalo's end, but when the Sabres moved down the ice Dahlin scored his second of the game through traffic with 39 seconds left in the period.

Winnipeg was outshooting the Sabres 27-19 after two periods.

Another man advantage five seconds into the third again resulted in one shot on goal for the Jets.

Skinner supplied the two-goal lead with his ninth goal of the season at 11:55.

''Guys were maybe ticked off at practice ... yesterday,'' Buffalo coach Don Granato said. ''There was better intent and they saw it through, and it's obviously nice to get the win.''

NOTES: The Jets were missing captain Blake Wheeler, who injured a knee in last Friday's shootout loss in Vancouver. He doesn't require surgery, but is expected to miss weeks.

Buffalo: At Minnesota Wild on Thursday in second game of a three-game trip.

Winnipeg: Host Washington Capitals on Friday in second game of a three-game homestand. 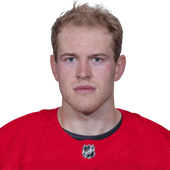