WAS
Washington
WAS
Capitals
4-2
7
FINAL
5

Alex Ovechkin extended his point streak to six games with his sixth and seventh goals of the season for Washington. Nick Jensen and John Carlson also scored as Ilya Samsonov made 32 saves for the win.

''It was a fun game for the fans,'' Ovechkin said. ''Lots of goals, lots of action. We'll take the two points and move forward.''

Anton Forsberg started the game for Ottawa, but was pulled after allowing four goals on 16 shots. Filip Gustavsson came in late in the first period and finished the game allowing three goals on 15 shots.

Senators head coach D.J. Smith was encouraged by Ottawa's second period, but disappointed that his team wasn't able to turn that momentum into a win.

''When you make it 4-4, you've got to take the game over,'' Smith said. ''We made a couple of really bad plays. I think they had three or four goals off faceoff wins by us and we just didn't execute. ... and when you have guys like Ovechkin and Oshie and these guys that can score, you can't make those mistakes if you want to beat them.''

Down 6-4 to start the third, Batherson made it a one-goal game with his third of the night at the six-minute mark, but Ovechkin regained the two-goal cushion with his second of the game midway through the period.

Trailing 4-1, the Senators came roaring back to tie the game, only to give up two late goals and trail 6-4 after 40 minutes.

Norris started the rally beating Samsonov from the right faceoff circle. Tierney made it 4-3 with a power-play goal midway through the period. Shortly after, Batherson displayed patience by drawing Samsonov out of position to score the equalizer for his second of the night.

''Obviously, the more time you're around you get more comfortable and it was just instincts,'' Batherson said of his second goal. ''Honestly, you know, I wasn't really thinking I just kind of did what I did there and I was lucky for it to go in there so I'll take it ... the longer you're around, the more confidence I have I find, so hopefully that keeps going.''

The night was made that much more special as Batherson's father was on hand, who lost his hat, as well as some family and friends.

Ovechkin regained the lead as he blocked a Nikita Zaitsev point shot and broke in alone, beating Gustavsson through the legs. With just 7.3 seconds remaining in the period, Oshie scored his third of the night.

''I thought he was really good tonight,'' Capitals coach Peter Laviolette said of Oshie. ''He worked really hard. He turned over a lot of pucks. I thought his line was good. But you could notice, Oshie was moving and making a difference just by the forecheck and turning things over.''

The Senators got the start they were looking for in the first period, but things quickly unraveled.

Batherson opened the scoring by beating Samsonov from outside the right face-off circle. But the Capitals then scored four consecutive goals in a span of about nine minutes.

Oshie took advantage of poor defensive coverage by Josh Brown as he scored the first two goals. Jensen made it 3-1 and Carlson ended Forsberg's night as he ripped a shot from the left circle.

This marked the Capitals' first road game against a Canadian team since Feb. 27, 2020.

NOTES: Ottawa G Matt Murray was sidelined after taking a knee to the head Saturday against New York, while D Michael Del Zotto was a healthy scratch. ... The injured Austin Watson has resumed skating which is positive news for the Senators. ... Washington rookie Hendrix Lapierre was thrilled to have the opportunity to play close to home. The 19-year-old grew up in nearby Gatineau, Quebec, about 40 minutes from Ottawa's arena and took a solo lap in warmup.

Senators: At Dallas on Friday. 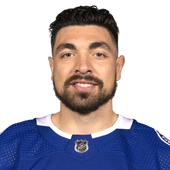