Chris Kreider, Mika Zibanejad and Jonny Brodzinski also scored for the Rangers, who have won five of seven. Artemi Panarin had three assists and Fox added two to help New York improve to 12-2-1 in its last 15 home games. Alexandar Georgiev made 20 saves.

In the extra period, Panarin brought the puck up the ice on a rush, drew a defender to him in the right circle and sent a pass to Fox in the middle before the defenseman beat Gibson for his ninth of the season.

''When I saw the 2-on-1 chance, got a second wind there, especially with Bread,'' Fox said. ''I played those 2-on-1s a few too many times in practice so I tried to do what the forwards do against us.''

After falling behind 3-2 midway through the third period, the Rangers rallied for their 20th comeback win of the season.

''We're a confident group. We never think we're down and out,'' Fox said. ''I don't think in our head we're down a goal and thinking the game is over. We're trying to get one. We're not always going to get one, but we've got a lot of talent and ability to score.''

Max Comtois, Cam Fowler and Derek Grant scored for Anaheim, which lost its fifth straight (0-3-2) - all on the road. Adam Henrique had two assists and John Gibson finished with 34 saves, including 18 in the third period.

''We had opportunities to get the two points. We came up short,'' Henrique said. ''We just need the points. A tough trip overall.''

The Ducks went beyond regulation for the NHL-high 20th time this season, falling to 9-11 in those games.

''We checked well and had our chances,'' coach Dallas Eakins said. ''That's the way it goes. ... We were committed right from the start.''

Gibson made several nice saves in the third period to keep the score tied 2-all. He stuck out his right leg to stop a tip try by Dryden Hunt at 8:42, then made a shoulder save to deny Alexis Lafreniere a minute later.

Grant gave the Ducks their first lead as he brought the puck up on a breakaway, skated in and beat Georgiev with a forehand for his ninth with 9:25 left.

The Rangers tied it at 3 on their second power play. Fox fired a shot from the point that went wide right of the net, but the rebound came off the end boards and Kreider backhanded it in from the right side with 6:20 left. It was his 39th of the season, tying Edmonton's Leon Draisaitl for second in the NHL, six behind Toronto's Auston Matthews. Kreider leads the league with 20 power-play goals.

''For (Kreider) to get that big one to tie it up was huge for us,'' Rangers coach Gerard Gallant said.

The Rangers took a 2-1 lead early in the second period during extended 6-on-5 play on a delayed penalty. Zibanejad got a pass from Fox at the bottom of the left circle and put it into the top left corner from a sharp angle at 3:06 for his 24th of the season.

Fowler tied it at 4:53 - just 12 seconds after Rangers defenseman Jacob Trouba was whistled for tripping. Off a faceoff in the right circle, Henrique got the puck to Fowler at the point, and he skated to his left and fired a shot through traffic for his seventh.

Brodzinski got the Rangers on the scoreboard first, taking a cross-ice pass from Filip Chytil and beating Gibson from the top of the right circle at 4:29. It was Brodzinski's first goal since Feb. 26, 2021, against Boston. He has eight goals in 73 career games.

The Ducks tied it on a fortuitous deflection with 5:55 left in the opening period. Troy Terry brought the puck around the back of the Rangers net and fired a shot from the right circle that appeared to go off New York defenseman K'Andre Miller, then it hit Comtois and went off Georgiev and across the line. It was Comtois' third of the season, and the assist gave Terry 100 career points.

Kreider's goal gave him 400 points for his career. He is the 17th player to have that many with the Rangers. Kreider, selected with the 19th overall pick by New York in the 2009 NHL draft, is the 12th player from that class to reach the milestone.

Asked about reaching the 400-point mark, Kreider turned to Panarin sitting next to him and asked, ''Bread, what do you have, 450 in half the games?'' before adding, ''It means I've stuck around for a while.''

''We have a number of guys banged up and playing hurt,'' Eakins said. ''We have shown we can still battle and get points.''

Ducks: Host the Florida Panthers on Friday night to open a three-game homestand. 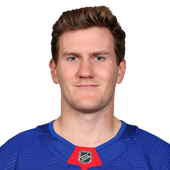