BOSTON (AP) The Boston Bruins set the NHL record for most home victories to start a season with their 12th straight, topping the Carolina Hurricanes 3-2 in overtime on Friday with a power-play goal from David Pastrnak.

The Bruins broke the mark of 11 that was set by the 1963-64 Chicago Blackhawks and equaled by the Florida Panthers last season.

''That felt awesome,'' Bruins first-year coach Jim Montgomery said. ''We talked about it after the second (period) going into the third. There's been a lot of great teams in this league and you're able to set a precedent, break a record. It's pretty special and it doesn't happen if those guys don't believe in themselves like they do.''

Boston, which trailed 2-0 late in the second period, tied it with 9:33 left in regulation when David Krejci scored his second of the game on a shot from the right point.

''It's never fun being down going into the third, you're sitting in here (in the locker room) trying to figure it out,'' Krejci said. ''You want to come out and do the job, something special on the line. It's hard to win in this league. To get 12 in a row at home is pretty special.''

In overtime, Carolina was playing shorthanded after being called for too many men on the ice when Pastrnak one-timed a pass from Brad Marchand inside the far post from above the left circle.

''It was a big win for us, obviously, coming from behind,'' Pastrnak said.

Jesperi Kotkaniemi and Stefan Noesen each scored a power-play goal for Carolina, and Pyotr Kochetkov made 38 saves. The Hurricanes lost their fifth straight.

In a rematch of last spring's opening-round playoff series that the Hurricanes won in seven games, Carolina shutout the NHL's highest scoring team for nearly two periods and jumped ahead a pair of power-play goals in the opening period.

''We took too many penalties. That's hurting us right now,'' Kotaniemi said. ''I think 5-on-5 we're doing a really good job. We started good tonight and couldn't keep that up.''

Boston's tying goal was originally disallowed because of goaltender interference on Nick Foligno but overturned on a coach's challenge after it was ruled that he was nudged into the crease by Carolina defenseman Brett Pesce.

Boston starting goaltender Linus Ullmark made 28 saves but had to leave with 13:03 left in the third period with an undisclosed upper-body injury. Teammate Connor Clifton had jumped on him to block a shot during a scramble. Jeremy Swayman made six stops in relief.

Carolina's Noesen scored at 6:34 in to make it 1-0. And with five minutes left in the period, Kotkaniemi collected the puck near the side of the net after Seth Jarvis' shot bounced off the back glass and slipped it inside the post at 15:05.

Krejci scored for Boston with 31 seconds left in the second.

Boston came in with a league-high 82 goals in 20 games (4.10 per game), but it was held to relatively few chances despite getting a 5-on-3 power-play advantage early on.

The Bruins honored captain Patrice Bergeron, who recorded his 1,000th career point when the team was on the road Monday against Tampa Bay, with a message on the Jumbotron. The crowd gave him a standing ovation. 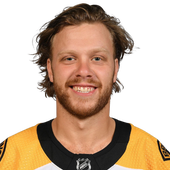