NASHVILLE, Tenn. (AP) Luke Kunin scored his second goal at 16:10 of the second overtime and the Nashville Predators beat the Carolina Hurricanes 4-3 on Sunday to tie the first-round series 2-2.

Kunin broke his stick and went to the bench for another. He then skated up and beat Alex Nedeljkovic from the inside edge of the left circle off a pass from Mikael Granlund.

Goalie Juuse Saros made a franchise-record 58 saves to ensure this series will return to Nashville. Game 5 is Tuesday night in Carolina.

Ryan Johansen and Nick Cousins each scored a goal, and Mattias Ekholm and Mikael Granlund each had two assists.

This was the first time both teams had gone to multiple overtimes in back-to-back games in a series. Nashville improved to 5-3 winning in double overtime for the second straight game, while Carolina dropped to 1-7 overall with one loss while still the Hartford Whalers.

Brock McGinn had his first two-game game in the postseason, and Vincent Trocheck also had a goal for Carolina. Jordan Martinook added two assists.

The catfish had been barely carried off when Nashville caught Carolina in a line change, and Kunin beat Nedeljkovic with a backhander through his legs at 57 seconds for his first this series. Trocheck tied it, batting in the puck off Martin Necas' shot in a flurry around Saros at 18:03 of the first.

Carolina coach Rod Brind'Amour complained about how his Hurricanes were fighting the refs after 14 penalties through Games 2 and 3. His lobbying for officials to call it both ways netted Carolina two power plays in the first period.

The Hurricanes also escaped a penalty when officials wiped out a double minor after a review showed Predators forward Eeli Tolvanen was caught first by teammate Mattias Ekholm's stick before Carolina forward Andrei Svechnikov's stick hit his face with 80 seconds left in the first. Officials are not allowed by rule to call another penalty in that situation.

Johansen put Nashville back up 2-1 at 4:53 of the second, reaching around Matt Duchene to backhand the puck past Nedeljkovic off the rebound of a shot by Duchene. The Predators had a rare 2-on-0 chance a couple minutes later, but Nedeljkovic stopped Yakov Trenin with his right pad.

McGinn tied it at 2 with with 1:55 left in the second. His slap shot from the outside edge of the left circle went in off the far post. McGinn missed the final 19 games of the regular season with an upper-body injury.

He then gave Carolina its first lead at 3-2 with a wrister 13 seconds into the third, beating goalie Juuse Saros stick-side.

But the Predators, 1 of 17 on the man advantage in this series, tied it up on their first power play in this game. Dougie Hamilton tripped Nashville captain Roman Josi, and Cousins redirected Erik Haula's shot at 3:15 for his first career playoff goal in his 25th game after not dressing in Games 1 or 2.

They got another when Svechnikov went in the box at 5:15 for cross-checking but couldn't beat Nedeljkovic.

Singer Carrie Underwood and her husband, former Predators captain, Mike Fisher, attended the game. Taylor Lewan, left tackle for the NFL's Tennessee Titans, chugged a beer and yanked off his jersey during a standing ovation in the second period. 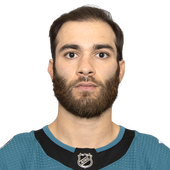