TAMPA, Fla. (AP) Mathieu Joseph scored with 1:35 left in overtime to give the Tampa Bay Lightning a 3-2 win over the Los Angeles Kings on Tuesday night.

Victor Hedman and Taylor Raddysh also scored for the Lightning. Steven Stamkos had an assist and moved within a point of becoming the 118th player to reach 900 points.

The two-time Stanley Cup champion Lightning (7-4) have gone into overtime in 11 of 28 games this season.

''You get into overtime, at least, you're bunching points,'' Tampa Bay coach Jon Cooper said. ''Yes, we've been in a few this year, and we've been in more this year than we had all last year combined. Guys believe they can win games, especially in overtime.''

''We came into the Stanley Cup champs building, we're pretty short on the back end, we played a pretty solid 64 minutes and earned a point,'' Los Angeles coach Todd McLellan said. ''Without sounding satisfied because we're not, we came for two points, it was well-played solid game by us.''

The Kings are without key defensemen Alexander Edler and Sean Walker.

After both teams had several great scoring chances in overtime, Joseph had his shot from the right circle trickle past Quick.

Vasilevskiy stopped Anze Kopitar on a breakaway earlier in OT.

''Vazy has been huge for us in overtime and saved another one there tonight,'' Raddysh said.

Quick made a nifty post-to-post save in the first on Ondrej Palat, and stopped Stamkos during breakaways in the second and third periods.

Vasilevskiy stymied Adrian Kempe on a breakaway in the game's opening minute.

Arvidsson put the Kings up 2-1 when Matt Roy's shot went off his back and past Vasilevskiy 30 seconds into the second.

Doughty scored a power-play goal midway through the first, before Hedman tied it on a delayed-penalty call with 1:59 left in the period.

Tampa Bay went 0 for 3 against a Kings' road penalty kill, which was last in the NHL entering the game. Los Angeles converted one of two man-advantage chances.

When asked if Point could be back before Dec. 25, Cooper said ''that would be a Christmas present.''

Kopitar had an assist, moving him within one of trying Wayne Gretzky (672) for the second-most in Kings history. . The Lightning have allowed five power-play goals over their last three game. . Doughty has 68 career power-play goals. Among Los Angeles defenseman, only Rob Blake, with 92, has more. ... Stamkos and Los Angeles' Dustin Brown eachhad six shots on goal.

LAKings
TBLightning
STARS OF THE GAME 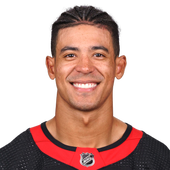