''It's kind of funny because I didn't feel I had my best tonight,'' Moore said. ''It was just one of those games where the puck finds you. It feels amazing, though. It is just funny because it felt like I was fighting the puck a little bit out there.''

Viktor Arvidsson assisted on all three goals for the Kings, who have won five of their last six games. Cal Petersen stopped 22 shots.

Zach Hyman scored for the Oilers, who have lost five of their last seven games. Stuart Skinner made 29 saves.

The Kings opened the scoring 4:23 into the first period when Moore unleashed a long shot that beat Skinner on the stick side.

Edmonton came close to countering midway through the first period when Connor McDavid made a one-handed play to lift the puck over Petersen, but Arvidsson managed to bat the puck away.

The Kings outshot the Oilers 13-6 in the first period.

Edmonton tied it at 1 at 12:47 into the second when Ryan Murray intercepted a clearing attempt and sent a pass to Hyman, who beat Petersen with a backhand shot for his eighth goal of the season.

Los Angeles regained its lead with just under three minutes to play in the second as Arvidsson sent a pass across to Moore, who fired a shot that went off Skinner's arm and into the net just as a penalty on McDavid expired.

Moore was able to complete the hat trick with an empty-net goal with 57 seconds to play. It was his fifth goal of the season.

''We are happy for him,'' Kings coach Todd McLellan said. ''He works his butt off night after night. He does the defensive things that are key to winning some nights and found a way to put the puck in the net.

''He has been there all year for us offensively, it just hasn't gone in a lot for him. He was leading us in shots on goal, which means he is around the net a lot, finally they are crossing the goal line.''

Oilers forwards Leon Draisaitl and McDavid were held off the scoresheet, ending their point streaks at 11 and 10 games, respectively.

''We know these guys well and that kind of game script fit right into their game - they score early and just kind of sit back and hold on,'' McDavid said. ''That's the game they want to play. We knew that. They didn't come out and surprise us with anything.''

NOTES: It was the first meeting between the teams since the first round of last season's playoffs, when the Oilers overcame a 3-2 series deficit to win in seven games. It was the first of four games between the Kings and Oilers this season. . Oilers defenseman Tyson Barrie played in his 700th career NHL game. . Edmonton debuted its new reverse retro jerseys, utilizing the gear logo designed by legendary comic book creator Todd McFarlane. . Kailer Yamamoto (undisclosed) and Evander Kane (wrist surgery) were sidelined for the Oilers. The Kings were missing Brendan Lemieux (lower body), Quinton Byfield (illness) and Alex Iafallo (lower body).

Los Angeles: At Vancouver on Friday in the third game of a four-game trip.

LAKings
EDMOilers
STARS OF THE GAME 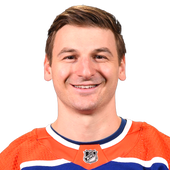