EDMONTON, Alberta (AP) The Colorado Avalanche spent the first three games of their series against Arizona trying to solve a hot goalie.

They put on a show the final two, displaying the flash and depth that makes them one of the favorites to win the Stanley Cup.

Nathan MacKinnon had two goals and two assists, Nazem Kadri also scored twice and the Avalanche routed the Coyotes 7-1 on Wednesday to close out the first-round playoff series in five games.

''Our guys really dug in and just a great focus on what we needed to do,'' Avalanche coach Jared Bednar said. ''We played to our identity.''

Colorado, the No. 2 seed in the Western Conference, took control of the series with a Game 4 blowout and skated into the next round with three first-period goals in Game 5.

Kadri scored two goals for the second straight game, both in the first period, and finished with five in the series. Samuel Girard also had a goal in the first and MacKinnon scored twice in 58 seconds of the second to put Colorado up 5-0.

''We kept saying early in the series we were going to wear them down,'' said Avalanche forward Gabriel Landeskog, who had two assists. ''That was our game plan and we stuck to it.''

Arizona overcame the distraction of general manager John Chayka resigning just before the postseason to get past Nashville in the Stanley Cup qualifiers.

The Coyotes managed to keep the high-revving Avalanche mostly in check through the first three games behind goalie Darcy Kuemper, but were overmatched while being outscored 14-2 the final two games.

Clayton Keller scored his fourth goal of the postseason and Kuemper allowed six goals on 30 shots before being replaced by Antti Raanta in the third period.

''It stinks. Anytime you lose it's never fun and the way it went down, it's going to be sour for a while,'' Coyotes forward Derek Stepan said. ''I hope that's going to be fuel going into next season.''

Arizona tried to stay alive in the series without two of its best offensive players.

Leading scorer Nick Schmaltz missed his ninth straight game with a head injury and top goal scorer Conor Garland sat out after being injured in Game 4 against Colorado.

The Coyotes never had a chance to get anything going offensively against Colorado's relentless pressure - just like in Game 4.

Colorado embarrassed Arizona in that game to take control of the series, scoring three goals in the first period of a 7-1 win.

The Avs kept their lines rolling into Game 5, putting the Coyotes on the heels while creating scoring chances and penalties.

Kadri scored 4 1/2 minutes in on a power play, one-timing a shot from the slot on a feed from Landeskog behind the net.

Arizona committed another penalty and the Avalanche again capitalized, going up 2-0 on Girard's shot from near the blue line through a screen.

Kadri had Kuemper whacking his stick against the goal after the Coyotes bunched up in the neutral zone and left him alone for a breakaway.

''They're lethal as it is and you can't have three penalties in the first period,'' Coyotes coach Rick Tocchet said.

The avalanche continued in the second period.

MacKinnon, a Hart Trophy finalist, scored on a slap shot from the right circle midway through and made it 5-0 from near the same spot on a power play. Zadorov closed out the second with his first goal of the postseason, putting the Avalanche well on their way to .

''We've been a group that for the most part has been together the last three, four years and we've grown together, been through the bad,'' Landeskog said. ''We've still got work to do, but what we have a locker room is a lot of character and obviously we've seen the product we can put on the ice.''

Notes: Colorado C Vladislav Namestnikov missed his third straight game after being injured in Game 2. ... Kuemper faced 34.2 shots per game in the series despite sitting out two full periods. ... MacKinnon has a point in all eight postseason games, Colorado's longest streak to open the playoffs since Peter Forsberg and Milan Hejduk in 2001.

Colorado moves on to the second round of the Stanley Cup playoffs.

Arizona's top priority will be to hire a general manager after John Chayka resigned just before the postseason started. 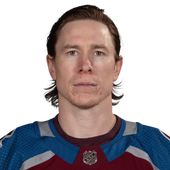