Rantanen scores OT winner, Avs up 2-0 in series vs. Knights

DENVER (AP) Mikko Rantanen found himself in the middle of an on-ice swarm from teammates after scoring the winner.

Wonderful and all, but he wanted to make sure the real star of the show received his fair share of the credit, too - goaltender Philipp Grubauer.

''Grubi bailed us out today. He had a really, really good game,'' Rantanen said. ''He's basically the reason why we got to OT.''

Rantanen was the reason it ended in quick fashion. He took a cross-ice pass from Nathan MacKinnon and sent a liner over the shoulder of Fleury to set off a celebration in front of a boisterous crowd. The goal came with Reilly Smith in the penalty box for slashing Rantanen.

''Not our best game, but still found a way,'' Rantanen said. ''That's what we've been doing the whole year. Sometimes we haven't been feeling it and Grubi's been awesome and stealing some wins for us - like today. That's what you need if you want to win the Cup.''

It was Rantanen's second career overtime winner in the playoffs. The first came in a Game 5 victory over Calgary on April 17, 2019, in a first-round series.

The Golden Knights weren't pleased with the slashing call.

Brandon Saad and Tyson Jost also scored for the Avalanche, who've won six in a row to start the postseason, tying the franchise mark set in 1987 when the team was based in Quebec.

Grubauer had 39 saves in becoming the first goaltender in franchise history to pick up six straight victories to start a postseason.

''It's really important,'' Avalanche coach Jared Bednar said of having a goaltending who can steal games in the playoffs. ''I thought his performance was exceptional.''

Alec Martinez and Smith had goals for the Golden Knights, who controlled large portions of the action after two full days off following a 7-1 loss in Game 1. A fresh Fleury provided a big boost. He didn't play in the series opener after a grueling seven-game series with Minnesota. Fleury stopped 22 shots.

The best-of-seven series heads to Vegas for Game 3 on Friday.

This was more like the tight series that everyone was expecting. The Avs and Golden Knights split the eight games in the regular season and finished tied for the most points in the league. The Avalanche earned the Presidents' Trophy - along with home ice throughout the postseason -- on a tiebreaker.

Vegas vowed to bounce back from the penalty-filled first game, with William Karlsson commenting after the morning skate: ''The sun is shining today.''

The Golden Knights clanged three shots off the post in the third period.

''If we keep playing the way we did tonight, we all have confidence in our team that we can come back in the series,'' Fleury said.

Colorado finished 2 for 6 on the power play and was outshot by a 41-25 margin. The top line of MacKinnon, captain Gabriel Landeskog and Rantanen was held in check - until overtime. The trio combined for five goals and three assists in Game 1.

Rantanen now has at least a point in his last 16 playoff games dating to last season.

Colorado remains tough to beat at home, winning its 13th straight at Ball Arena dating to the regular season.

Smith tied the game at 2-all when he broke free and lifted a backhanded shot past Grubauer.

Jost gave the Avalanche a 2-1 lead in the first with a power-play goal. His score was after Vegas tied the game on a power-play score from Martinez. It marked the first time in this postseason the Avs have surrendered a goal in the opening period.

Saad started the scoring at 3:39 of the first when he barely got anything on a wide-open shot but the slow roller caught Fleury by surprise and the puck trickled between the veteran goaltender's pads.

Saad extended his goal streak to five games, which is tied for the third-longest string in Avalanche history for a playoff year. The record is seven straight by Claude Lemieux (1997) and Joe Sakic ('96).

''Even though we didn't play our best, it's a great character win,'' Saad said.

Colorado is 14-1 in a best-of-seven playoff series when winning the first two games since relocating to Denver in 1995-96. ... Avs D Samuel Girard had two assists. ... Vegas D Shea Theodore had two assists. 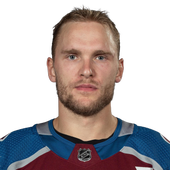