Zibanejad has 3 goals, 3 assists in Rangers' rout of Flyers

PHILADELPHIA (AP) Mika Zibanejad is finding the net again. He's feeling good - and so are the Rangers.

Zibanejad also had three goals and three assists in a 9-0 home win over the Flyers in their previous meeting eight days ago. He's the first NHL player ever with six or more points in consecutive games against one opponent in the same regular season.

''The puck seems to go in right now,'' Zibanejad said. ''It's nice to be able to contribute offensively for the team. It's obviously a great feeling when you win and you can contribute.''

New York continued where it left off in this one. Pavel Buchnevich added two goals, and Ryan Strome, K'Andre Miller and Filip Chytil also scored as the Rangers won their third straight and fifth in their last seven games.

Zibanejad has been at the forefront of late. He had a career-high 41 goals in just 57 games last season, but struggled through the first 27 games this year with just three tallies. That changed in last Wednesday's win over the Flyers, and he's up to 10 goals through 32 games.

''I don't know if self-doubt is the right word, but it was a struggle obviously for me to get the puck in the net,'' he said. ''I try to stick by the work and trust myself that it's going to come. Now it's really been going for me and the whole team as well.''

Claude Giroux, Kevin Hayes and Sean Couturier scored for the slumping Flyers, who have lost four in a row and 10 of 14.

''This team has really lost its identity from where we were at the beginning of the year to where we are now,'' defenseman Shayne Gostisbehere said. ''We have to find something now. We're too good of a team to let it squander away. It's unacceptable.''

The Rangers scored three straight goals in the opening period then notched two power-play goals in the opening 2:06 of the second to chase goalie Carter Hart, who allowed five goals on 10 shots. They scored another goal 36 seconds later on their first shot against Brian Elliott.

Ryan Strome had three assists for the Rangers, who were led by Knoblauch for the fifth straight game. Igor Shesterkin, playing in his first game since March 4 due to a groin injury, made 41 saves.

Zibanejad scored his first with 6:24 left in the first on a deflection of Fox's slap shot from the point to make it 3-0. His second 54 seconds into the second period on the power play was a one-timer after a cross-ice pass from Fox, and he got his third 1:12 later on a slap shot from the slot.

''It's great to see him getting rewarded,'' Fox said. ''He does everything for us.''

That was the end of the day for the slumping Hart, who has allowed 16 goals over a three-game skid.

Miller scored on a wrister from the blue line that appeared to go off Gostisbehere on the first shot on Elliott.

Zibanejad got his sixth point with his third assist on Buchnevich's short-handed goal 33 seconds into the third.

Strome extended his points streak to seven straight games with his 11th goal of the season 8:01 into the contest to give New York a 1-0 lead, finishing a beautiful pass from Artemi Panarin with a one-timer just to the left of Hart. Strome has two goals and 10 assists during his streak.

The Flyers have lost six of seven home games since fans returned to their building. They were 6-4 without fans in attendance.

New York welcomed back assistants Jacques Martin and Greg Brown, both of whom had been out due to COVID-19 protocols. Head coach David Quinn remained sidelined for the same reason.

Flyers' Oskar Lindblom received a strong ovation from his teammates during Thursday morning's skate, and Lindblom revealed after the game that it was after the news was relayed that his latest tests came back cancer free. Lindblom was diagnosed with bone cancer in December 2019. 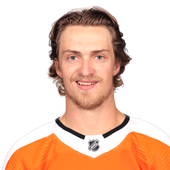